One of the foundations of a good trade education is understanding the vocabulary of that trade. So for a plaster education we’ll begin with the most fundamental of terms, Plaster.

In some languages and localized areas of the English speaking world plaster is ‘mineral specific’, such as a gypsum derived material, or ‘use specific’ such as a coating applied in interior. However, our English word “plaster” ultimately derives from the Greek ‘emplastron’ (εμπλαστρον) meaning “to daub on”.

So the term “plaster” can rightly describe a variety of interior or exterior coatings that are daubed, thrown or trowel applied.

In plastering it refers to strips serving as a termination and guide for the larger infill areas. Often if wood, metal or non-plaster materials are used it will be referred to as a ‘ground’. However, if the strip is made of plaster it maintains the name screed.

Also, a screed is a generic term for the straight edge used to level the infill surface and the act of leveling is called ‘screeding’. There are a variety of screeds that have specialty applications with names such as rods, darbies, slickers etc.

This grouping of vocabulary comes from across the pond, common terminology in the UK and Ireland.

It is most descriptive (but not exclusively) of the traditional 3 coat lime plastering system used over monolithic substrates such as brick or stone.

The RENDER is the first coat of plaster, the ‘coarse stuff’ with large, sharp aggregates. It is applies rough and and gets scratched up to provide a mechanical key or bonding surface for the next coat.

The FLOAT is the next coat with the same material. However, the surface is scoured, compressed and leveled with a wooden hand float, hence the name.

The SET, is the final coat. This is the final mix with lime putty and fine aggregates with Plaster of Paris (gypsum plaster) added to initiate a 'set' or firming up of the lime.

The Greek work ‘gypsos’ (γύψος) described the mineral that we today identify as gypsum.
Gypsum plasters may contain sand and small percentages of other binders such clay or lime.
Many useful gypsum plasters are in fact a blend of different types of gypsum:

Alpha Gypsum – The hemi-hydrate form baked under higher barometric pressure. The resulting material can have up to 10 times the compressive strength of beta gypsum. 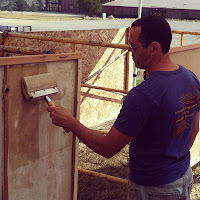 This is an effective tool for moisture management when finishing clay, lime or gypsum plasters.

The release of water is directly related to pressure applied. Over-saturated areas common with sponges and pump sprayers are easily avoided with a blister brush.


This technique of carving into a plaster to reveal a contrasting colour underneath is very much associated with the Italian tradition from whom we have directly borrowed the word sgrafitto meaning ‘scratched’. However, the Italians in turn had borrowed the term from the Greek ‘gráphein’ (γράφειν) meaning to write.

From the same origins the Germans first coined the common designation for the form of carbon useful for writing, ‘graphite’. 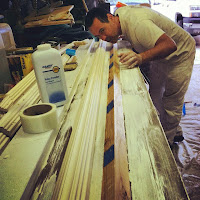 Plaster mouldings can either be formed 'in place' or on a flat table or 'bench' to be later applied. 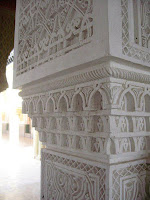 The technique of chiseling into fresh plaster in deep relief in situ (called ‘gebs’ in Arabic) is a craft that was developed to perfection by the Moors. After the expulsion of the Moors from the Iberian peninsula Muslim artisans were given opportunity to convert and some continued their craft in Christian motifs developing a very rich tradition in Provence.

Gypsum is the ideal medium for this technique. While fresh gypsum plaster is soft enough to easily carve it has great plasticity and will not easily crumble. This makes it possible to achieve deep undercuts with sharp edges and thin details that soon develops hardness and durability as the plaster dries and fully cures.