Complexity and Contradiction in Architecture
by Robert Venturi 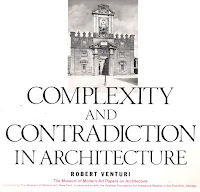 
In 1966 Postmodernism escapes the bounds of continental philosophy and literary criticism making its grand splash in architecture with the publication of this book, the broadly acknowledged gospel of architectural Postmodernism*. Since its publication three generations of architects have been indoctrinated in it. Therefore, if you wish to understand why the architectural and planning professions dysfunction as they do today, then this is a seminal text you are obliged to consider.

A Critique of Orthodox Modernism

The first two chapters are actually quite coherent. Venturi quotes and acknowledges inspiration from the author T.S. Eliot who spoke of drawing tradition from more than just the immediate preceding generation, rather the whole of Western civilisation. Setting the stage honestly, Venturi confesses his personal attraction for complexity and contradiction and highlights the eras of Western civilisation that exemplify this best in architecture: Mannerism, the Baroque and Rococo.

Next he delivers Orthodox Modernism an initial blow: “Architects can no longer afford to be intimidated by the puritanically moral language of orthodox Modern architecture...Orthodox Modern architects have tended to recognize complexity insufficiently or inconsistently. In their attempt to break with tradition and start all over again, they idealized the primitive and elementary at the expense of the diverse and the sophisticated. As participants in a revolutionary movement, they acclaimed the newness of modern functions, ignoring their complications. In their role as reformers, they puritanically advocated the separation and exclusion of elements, rather than the inclusion of various requirements."

Then Venturi follows up with another condemnation that lays the International Style to the mat: "The doctrine 'less is more'  bemoans complexity and justifies exclusion for expressive purposes...here the building becomes a diagram of an oversimplified program for living-an abstract theory of  either-or. Where simplicity  cannot work, simpleness results.  Blatant simplification means bland architecture. Less is a bore." Orthodox Modernism was condemned as simple, bland and boring with a clear implication: Modernism wasn't "modern" anymore. Readers, including a generation of young, frustrated architecture students were hooked. What was Venturi going to lay out next? Where was he taking them? Where was the future of architecture headed?

Complexity and Contradiction in Writing about Architecture

Chapter three, entitled "Ambiguity", is aptly named and self descriptive. Venturi seeks the "discrepancy between physical fact and psychic effect" typified by the Abstract Expressionism of the avant-garde of the art world who had already effectively mastered the principle of unresolved tension, paradox and contradiction, directing their dramatic genius towards chaos. Here and elsewhere there are echoes of the dialectic process as described by Hegel or Kierkegaard where opposites are brought into dualistic conflict, synthesising a new, if relative, truth that in turn finds itself in renewed opposition and so ad infinitum. The anticipated long term effects to the actual psyche of the human beings who find themselves living inside the architectural expression of ambiguity itself is never mentioned.

Next he purports to say something of incredible profundity: "Architecture is form and substance - abstract and concrete." No kidding. When have you ever experienced 'formless stuff' or 'immaterial form'? That matter and form are of a piece, that they always go together, that we're really describing one thing is hardly revolutionary and is certainly not a paradox. The only complex thing about it being the way it's presented in this chapter. In any case, it is the last mention Venturi has of  the material. We're off to the world of contradictory ideas, all form and programme from here on out.

By chapter four the nonsense machine is in top gear: "Contradictory levels of meaning and use in architecture involve the paradoxical contrast implied by the conjunction "yet." They may be more or less ambiguous...this series of conjunctive "yets" describes an architecture of contradiction at varying levels of program and structure. None of these ordered contradictions represents a search for beauty, but neither as paradoxes, are they caprice." WTF is that supposed to mean? Who knows but prepare yourself for six more chapters of dense Postmodern theory-laden jargon whilst fetishising over every anomaly and freak work of Classical architecture as approbation of his ideas. In rare lucid moments, Venturi pulls back slightly, acknowledging that a certain balance (rather than tension) might be warranted between order and chaos but always goes on to reassert and justify his bias for tension, chaos and violence. The book concludes with a chapter of embarrassingly crude and just awful projects by the author, mostly in foamboard.

A fair number of my professional colleagues would classify themselves as either Classicists or practitioners of Traditional Architecture. Academically, almost all of them received an university education rooted in architectural Postmodernism, with Venturi as required reading. Many have expressed appreciation for the freedom that Venturi's polemic brought about from the hegemony of Orthodox Modernism and the permission it granted to reconsider traditional forms. I would concede there is a measure of truth to that. However, they often assert that architectural Postmodernism is quite a different thing than philosophical Postmodernism, nomenclature is about as much as they share in common; "PoMo" being nothing more than a style getting off to a slow start in the 60's with Venturi, seeing its nadir in the mid to late 80's. Perfectly harmless. That would be a mistake.

To illustrate a few fundamental contrasts between the Enlightment or Classicist philosophical world view with those generally held in Postmodernism:

The Metaphysics of Classicism is one of form imposed upon matter producing something real, tangible that points to the transcendental. Postmodernism denies a knowable reality, eschews the importance if not the very existence of material, privileging abstracted form and concept.

The Epistemology of Classicism considers experience of and reasoning upon an objective reality, one in which complexity is resolved through hierarchy, order, harmony and balance. By contrast, Postmodernism views reality only through relative, subjective frames. Complexity is purposefully left unresolved, tension exacerbated by violent contrast and juxtaposition reflects the world as it really is, a dynamic battleground.

The Ethics of Classicism are humanistic. The individual is not fully determined, has at least limited autonomy and can be held responsible for his actions. The civic realm ought to physically express a forum for rational discourse amongst individual members who constitute the society. Postmodernism denies individual autonomy as illusory. The individual being a socially constructed product determined, subsumed and constituted by his culture. As such there can be no basis for a shared understanding between conflicting and contradicting ideologies outside one's own identity group, no shared values. "Meaning" is absurd in any literal sense, only to be understood as something arbitrary imposed by the will of those wielding power.

Unlike many of my colleagues I do not see Postmodernism as a passé style, as having been a mere surface phenomena. This is a philosophical movement deeply entrenched in the humanities, schools of fine arts and architecture in academia. It is shaping a generation and needs to be understood. The current, 21st century movements in architecture such as Deconstructivism, Blobism, Parametricism etc. all decry material as nothing more than a means to a conceptual statement, all promote visual and experiential tension and unresolved contradiction, all revel in absurdity and refuse to participate in a shared civic order yet are shaping our built environment. Postmodernism is alive and well in architecture and in fact dominates contemporary architectural education and practise. Furthermore, I would assert that Postmodernism is fundamentally incompatible, in fact being the result of two centuries of departure and in most cases opposition to the Enlightenment. It is a grievous error to think of Postmodernism as an appropriate foundation for the recovery of Classicism.

In architecture, 'Modernism' stands in opposition to 'Modern', that is to say Enlightenment inspired design as principally expressed in the Classical. Architecturally, both 'Modernism' and 'Postmoderism' materially express Marxist and Postmodern intellectual culture.