This term comes directly to us from French where the design has figured prominently in French architecture since the Renaissance. The term is derived from the Greek term for papyrus, ‘khartēs’ (χάρτης) from which we also receive the English word ‘chart’ with the original sense of a ‘map’.

A cartouche does in fact resemble a stretched, convex sheet of paper surrounded by scrolling ornamentation and is often prominently featured on historic architectural drawings, maps and globes. 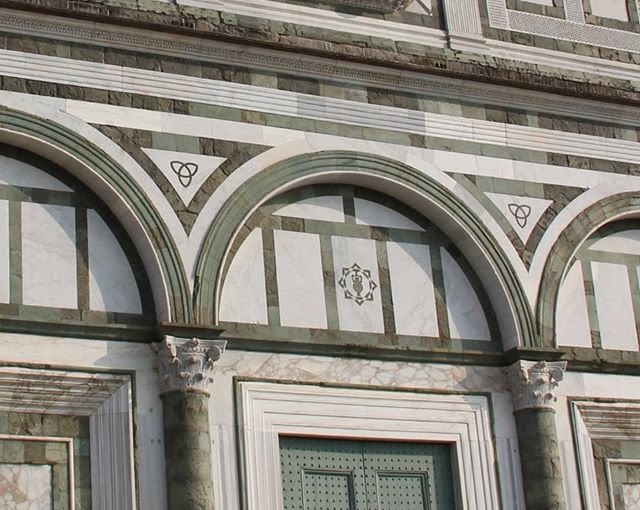 The ‘spandrel’ is the triangular, curvilinear space formed between arches and the entablature above.

Spandrels are a natural focal point, an ideal surface to receive decorative treatment. They featured prominently in many of the designs of the Italian Renaissance and later Italianate revival.

‘Man is the measure of all things’ – Protagoras, 5th century BC.
Leonardo da Vinci’s famous work relied on Vitruvius’ study of human proportion to create a geometrical model of the elevation of the human form.

Both Leonardo and Vitruvius embraced a tradition architecture based on fundamental, universal principles that exist in all life, including the human form. The ‘Vitruvian Woman’ was recently illustrated at a Critical Mass.

These terms of varied origin have collectively come to describe types of interlaced moulding patterns so associated with traditional English ceilings.

The description ‘strap’ came from its resemblance and inspiration from the leather tooling craft whereas ‘frete’ was a French word for the interlaced patterns engraved in or that otherwise adorned heraldry and shield decoration. ‘Tracery’, also of French origin, has strong associations with the Gothic, particularly the Rose window.

The general form of the baluster has always been used in architecture. We have many examples of ornate candelabras from Roman times exhibiting this form. However, the Romans typically used ‘transennae’ (which we’ll consider tomorrow) for parapets and banisters, the balustrade really an invention of the Renaissance.

The origin of the term goes first back to the Greek ‘balaustion’ (βαλαύστιον) then further back in antiquity of ancient Semitic origins and is a reference to the bulbous flower of the pomegranate flower.

Like our previous example of the Attic base, the ‘Attic’ description is a 17th century reference to Athens, specifically the ‘Attica’ style pilasters that were widely used at that time.

The ‘lintel’ is the beam above the door, window or other opening that supports the wall above.

By contrast, the ‘sill’ is a beam placed at the bottom of the window whose principal purpose is to direct water away from the opening.


I signed up last autumn for an online course from Yale University Department of Classics on Roman Architecture. There are lectures, homework, exams, the full experience of which I would like to share some of it with you! The last couple of weeks we have been discussing Campania, the area around Mount Vesuvius whose devastating 79 C.E. eruption preserved so much of Ancient Rome's art and culture for us today. I'll first share a few thoughts on Roman painting styles and then conclude with my response to our second essay assignment: Should Rome Be an Artifact or a Living City?

The First Style of Roman wall painting was actually a Greek import. Popular during the 2nd century B.C.E. it featured a series of panels (socle, orthostats, isodomic blocks) surmounting a plinth and terminating above with a stringcourse and projecting cornice. All of this was realised in plaster relief and painted to resemble precious, imported marbles, an indication of sophisticated Hellenistic taste.

The Second Style was uniquely Roman and was typified by the introduction of architectural forms and the panorama. The panoramic scene might be either naturalistic or a fantastic stage set. A few of the finer examples such as at the 1st century B.C.E. House of Augustus are evidence that Roman artists were familiar with and occasionally employed linear perspective.

If the previous styles might be what we think of as a faux finish and a trompe-l'œil mural, the Third Style makes no attempt to imitate materials or fool the eye. It is instead intended in its very design to appear strictly as decoration. Often it is characterized by highly attenuated colonettes and cornices that serve as devices to constrain an idyllic landscape not unlike a framed picture hung on a wall.

All of this experience in fresco painting culminated in the Domus Aurea or "Golden House" of Nero. At the outset of construction Third Style painting was employed. However, the Master painter Fabullus developed a unique Fourth Style that seemed to combine elements from the previous styles that created a unique composition. This last style was emulated in Pompeii in the rebuilding efforts following the earthquake of 62 C.E. Imitation of marble was introduced in the plinth and socle resembling the First Style but simply painted instead of in relief. Substantive architectural elements were also reintroduced but as fragments and artifacts rather than logical compositions. Much of the framed decoration and free floating fantasy elements of the Third Style were maintained.

Should Rome Be an Artifact or a Living City?

Unquestionably Rome today is a living, vibrant city largely due to its great architectural tradition, a conventionalized system of geometric proportion coupled with humanistic principles. Yet, the seat of the once mighty empire now appears the province, with the recent imposition of an unsympathetic, foreign Modernist style that threatens the architectural unity of the Eternal City.

Richard Meier's dour Museum of the Ara Pacis led the assault in 2005. There is nothing Roman about the building. Richard's signature over-sized museum: a blocky mass of travertine, glass and steel is completely indifferent to the function of a piazza the museum was meant to anchor. Its relation with the adjacent neoclassical churches of San Rocco and San Girolamo? Erecting a wall to obstruct their view!

Deconstrutivist Zaha Hadid was featured recently in Steven Semes' blog "The View from Rome". The MAXXI Museum of Contemporary Art quite literally cannibalizes the existing traditional architecture, a canvas of "rupture" and "transgression". No link to the traditions of Rome, no human scale, pure egotistical aggrandizement.

Must contemporary construction be incompatible with the historic urban fabric of Rome? Not at all! A distinction should be made between contemporary architecture and a Modernist architectural style. A fine  example is the bustling Richmond Riverside Development near London realized in the mid 1980's by architect Quinlan Terry in traditional architectural styles. Rome too must decide either to expand their legacy or permit their architecture be mummified as artifacts in a city museum of glass and steel.

Posted by Patrick Webb at 8:51 PM No comments:

Pre-cast plaster mouldings really did not become widespread until the late 19th century. The innovations in gelatins and incorporation of jute cloth and wood reinforcement became known as ‘fibrous plaster’ in England and ‘staff’ in France.

Staff sounds particularly un-French. Urban legend has it that they originally used sticks, ‘staffs’ to hold up the mouldings until they set. I tend not to believe that the French adopted an English word even if that ever was their practice. More likely it derives from old French ‘estofer’ meaning to enrich or decorate.

Straw is an ideal substrate for traditional plasters made from mineral binders such as clay, gypsum and lime.

An acronym for Glass Fiber Reinforced Gypsum. Sometimes described as GRG or GFRC if cement is used instead of gypsum. Layered fiberglass between brushed or sprayed on coats can provide a significant increase in tensile strength. Pieces can be cast much lighter, as thin as 3/16”. Often this is a good specification for large ceiling mouldings such as vaults, domes, coves and arches.

Fiberglass is available as a spool of linear thread that can be chopped up with a gun and mixed directly into the plaster. Also available in bulk pre-trimmed to specified lengths.

A finely woven fiberglass cloth that is very thin and flexible, allowing for multiple coats

A coarsely woven fiberglass fabric that is more rigid, usually applied in one or two coats only. An alkali resistant version is commonly used with GFRC work.

‘Harling’ is an external render technique common to the UK and Northern France to finish a masonry substrate. After an initial coat of stucco is applied and whilst still wet, a variety of materials such as pebbles, gravel, sand or shells are added to a slurry of the same material and thrown against the surface using a shovel like tool called a ‘harling trowel’.

A similar technique where just the aggregates are ‘dashed’ or thrown against the wet stucco surface.

Posted by Patrick Webb at 1:56 PM No comments: