An Ecological Material for Restoration and Construction 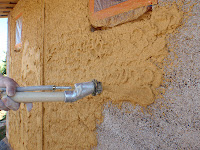 The innovative, original American system of straw bale construction has been warmly and increasingly embraced as a beautiful and ecologically sustainable construction alternative for France and other countries of the European Union.

Traditional French plasters have been used extensively as coatings for EU straw bale construction. The article below is based on the presentation “Plaster - An Ecological Material for Restoration and Construction” delivered by Frédéric Charpentier, consulting architect for Maisons Paysannes de France at the 2010 Bâtir Ecologique (Ecological Building) conference in Paris.


Currently, a number of coatings are utilized for straw bale construction: cob and other clay or earth based coatings, lime stuccos of varying degrees of hydraulicity as well as traditional or Portland cement. The primary need of an exterior coating is to protect the insulating straw substrate against damage by water and fire. All mineral based coatings properly applied can achieve this fundamental purpose. Additionally, an ideal coating would possess the following properties:
Traditional French plasters such as Stuc Pierre and Terre de Séléné exhibit the above characteristics. The importance of breathability, the capacity of a coating to transmit water vapor, is widely known for monolithic substrate construction. Often less understood are the benefits of a porous coating. To be sure, guidelines are to be followed to prevent water migration due to capillary action; however, the porosity of gypsum allows for the evacuation of condensation or water penetration caused by structural cracks or extensive inundation.

As with all mineral based coatings, gypsum is a non-combustible material. However gypsum plaster, technically known as calcium sulfate hemi-hydrate when combined with water, returns to gypsum or calcium sulfate dihydrate (CaSO4·2H2O) chemically combining calcium sulfate with two water molecules. When exposed to fire, a wall coated with gypsum plaster will release water vapor which retards the spread of fire and maintains the temperature in the adjoining room less than 350°F thus inhibiting the spread of fire via spontaneous combustion and often starving the fire through lack of oxygen. In this way gypsum plaster is not just incombustible but actively functions as a fire retardant. 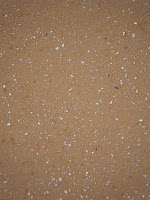 This same chemical property of raw gypsum allows the manufacture of gypsum plaster to be achieved at comparatively low temperatures. Typically gypsum is baked in a horizontal kiln at the relatively low temperature of under 500°F for a couple of hours under autoclave conditions to create plaster. This is considerably less than the embodied energy expended in lime (1500°F) or Portland cement (2700°F) stuccos. Unlike hydraulic limes and cements, gypsum coatings can be removed and recycled as a plaster.

Another property of gypsum plaster is that it is lightweight and self binding. Average weights of coatings are between 5 to 6 lb per ft² at 1 inch thickness. As added water is bound chemically in the set there is no shrinkage of the coating and no need for sanded aggregates to bind the material. For this reason gypsum plaster can be applied as thick as 1 ½” in a single coat. The set is reached in a few hours. As a result, plaster can be applied so long as there is not a frost the same day. Plaster is first applied as a scratch coat directly over straw bale or lathe to a thickness necessary to fill in the inconsistencies of the substrate. The rapidity of set also permits a subsequent coat to be applied the following day. Generally this can be applied at less than 1” thickness to achieve a planar surface. In Europe, wool wood sheathing such as Fibralith is often utilized to supplement insulating performance and eliminate the need for a scratch coat. This relative ease of application is an attractive quality for both professionals and DIY’s. 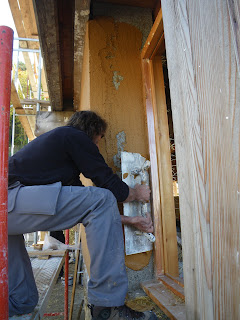 Not to be forgotten is a most important aspect of sustainability; beauty. The surface of the plaster can be finished with scraped, sanded, washed or even ashlar cut techniques so as to appear like limestone block. Running and casting versions can be utilized for running cornices, adding quoins and decorative ornamentation. Often shells, chaulk, limestone, shale and straw are added in the finish coat for strictly aesthetic effect.

French plaster is a proven coating technology that has been utilized for centuries in hundreds of thousands of buildings in Paris, Normandy, Toulouse and throughout Europe.
The Vieujot family has maintained continual manufacturer of gypsum plaster of Paris since 1880. In 1996 Plâtres Vieujot established Plâtre.com to better serve the market for decorative, ecological and restoration coatings of gypsum, clay, hydraulic and aérienne lime.

The American College of the Building Arts

Speaking from personal experience, I can say that my own plastering education was a major challenge to undertake. Due to the general decline of the trade in the 1940’s the apprenticeship programs supported in plaster shops and by the unions largely disappeared. By the 1980’s only a handful of old timers were around and most of them were jealously guarding their knowledge for fear of losing the limited available work to a younger generation. However, if you were respectful, courteous and patient there were a few gems to extract.

Beginning in the 1990’s plaster began making a slow and steady return to architectural specification in the luxury residential, public/institutional, restoration and natural building sectors. Nevertheless, the training infrastructure that formerly existed remains to be rebuilt and this is a significant factor that has hampered its growth.

Yet there is reason for encouragement for the future of plaster education. In North America, plaster unions have been placing an increased emphasis on fundamental plaster education for their members and a vocational Job Corps pre-apprenticeship program designed to introduce young people to the trade. European institutions such as Les Compagnons in France and Il Centro Europeo Per i Mestieri del Patrimonio in Italy are working hard to keep the trades vibrant in their countries and have an increased program of outreach with related institutions around the world. 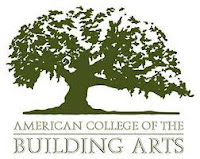 I would like to introduce a preeminent institution right here in the US dedicated to the artisan and the heritage building arts. The college combines theory and practice into a 4 year Bachelor degree program. Their mission is well articulated in the following statement:

“The American College of the Building Arts educates and trains artisans in the traditional building arts to foster exceptional craftsmanship and encourage the preservation, enrichment, and understanding of the world's architectural heritage through a liberal arts education.”

I have been privileged to support this institution in the past as a guest lecturer and sponsor of the annual Master of the Building Arts festival. It was an honor to be offered the position of Adjunct Professor of Plaster Working at the college and I look forward to rolling up my sleeves for the fall semester of 2013 engaging students in theory and practice.

Plaster traditionally has been considered an allied art to the field of architecture. Quite logically, the artisan should have a high level proficiency in architectural language. This is accomplished at ACBA through a core curriculum of Classical Architecture. There are several courses on architectural history, philosophy and design. Drawing, sketching, hand drafting are all requisite studies. Only after these skills have been mastered do students learn CAD as a communication not a design tool.

Academics such as English, foreign language, math and science are combined into a unified program of study shared by all students, tailored to support practical applications of the heritage trades. A total of 12 credit hours per semester are dedicated to theory and academics.

Plaster as any of the building trades is largely a tactile experience. Theory is put to practice daily under the guidance of experienced artisans. The freshman and sophomore years outline a combined study of brick masonry, architectural stone carving and flat plasterwork. This cross training in the “trowel trades” gives a strong foundation for the junior and senior years of specialization that for plaster includes mouldings and ornament.

In addition to the 6 credit hours of institutional practice per semester, 8-10 week summer internships are mandatory. Students have already been equipped with a fundamental level of trade knowledge and are placed so as to be an asset to the company they work with. 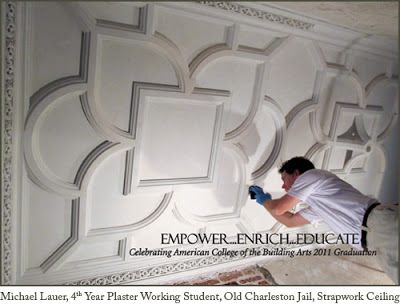 Exchange with plasterers and plaster companies, plaster manufacturers, related institutions, plaster unions are all very important for the students and the college itself. Please do not hesitate to contact us if you have an interest in taking on an intern, sponsoring an event or creating a dialogue in regard to trade education.

As part of their commitment to outreach and development of the building arts, programs of continuing education for working professionals based at the college are being organized for the spring of 2014.

A superb video about ACBA:
http://buildingartscollege.us/wp-content/uploads/2013/11/american_college_of_the_building_arts_1280x720.mp4

An overview of the Trowel Trades program including Plaster Working:
http://buildingartscollege.us/?page_id=1852