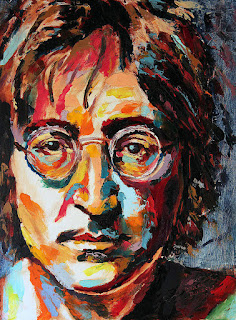 I miss John Winston Lennon, I grew up on his music. A man who put his thoughts to verse in a manner that stirs the soul. The following critique is one he might've made himself, or at least I'd like to think so. If there is any doubt concerning the intentions of "Imagine", here are Lennon's own words:
"'Imagine', which says: 'Imagine that there was no more religion, no more country, no more politics,' is virtually the Communist Manifesto, even though I'm not particularly a Communist and I do not belong to any movement."
The song begins with a religious critique:
Imagine there's no heaven
It's easy if you try
No hell below us
Above us, only sky

Here Lennon "imagines" a world that has moved past, rejected, or perhaps just forgotten formal religion and its concepts of a future oriented towards rewards or punishments, heaven and hell. Just the here and now, the material world. In a repeating dialogue, Lennon posits what might result from a world like that:
Imagine all the people
Livin' for today

I think there is little doubt that, especially in the first and second "worlds", we've become less religious. Under Communism religion was completely forbidden, whilst in the West the majority have turned atheist, agonostic, or lack the deep guiding belief that their forefathers might've held. Is the end result that people are "Livin' for today"? It hardly seems so. Perhaps orientation towards the future is not a religiously imposed condition, rather a fundamental trait of human consciousness.


Imagine there's no countries
It isn't hard to do
Nothing to kill or die for
And no religion, too

World War II was the most bloody inter-national conflict in human history, the effects of which, though fading from memory today, were very much present at the writing of this song. The then present threat of a third world war and nuclear holocaust was likewise quite palpable. Ostensibly established as a trading bloc, in many respects I find the experiment of the European Union an effort at such denationalisation.

Imagine all the people
Livin' life in peace

So, for Europeans is there, "nothing to kill or die for" and will they continue to be, "livin' life in peace"? The pressures brought to bear by a recent pandemic seem to be revealing flaws in that theory and a rising rejection of the highly centralised socialist state.

For Karl Marx, economic inequality was the foundational basis for class conflict. Human labour and the exploitation thereof together with the privatisation of nature were the driving forces of history. A transcended consciousness should result in unmediated fellowship where each gives according to his ability and each takes only according to his need, thus:

Imagine all the people
Sharing all the world

This has been a very seductive idea for humanity. It sounds so good. Unfortunately, everywhere that the elimination of private property has been attempted greed has persisted, hunger ensued, and millions have died. It is an act of the imagination that doesn't seem to correlate to human beings as we actually are. Perhaps we've a need to possess...possess a home, a family, a community, and in our most positive endeavours act as responsible stewards of nature.

That being said, John Lennon was hardly a ninny, blind to the pitfalls of the aforementioned way of thinking. In his earlier song as a member of the Beatles, "Revolution", he records several personally experienced observations:

"You say you want a revolution
Well, you know
We all want to change the world

You tell me that it's evolution
Well, you know
We all want to change the world


You say you got a real solution
Well, you know
We'd all love to see the plan

You ask me for a contribution
Well, you know
We're all doing what we can

But if you want money for people with minds that hate
All I can tell you is, brother, you have to wait

You say you'll change the constitution
Well, you know
We all want to change your head

You tell me it's the institution
Well, you know
You better free your mind instead

He concludes by telling us, "Don't you know it's gonna be Alright"
I hope so John, I sincerely hope so...