Carved into the ovolo (half round) profile of stone or wood or cast in plaster or metal, the iconic egg & dart mould enrichment alternates the feminine symbol of fertility, the egg with the male symbol of virility, the dart.

The Romans did not employ balusters in the design of their parapets and banisters. Often a 'pierced screen', the Latin 'transenna' was used instead.

The Greek ‘anthemion’ (ανθέμιον) meaning ‘flower’ or ‘blossom’ had been an extensively used motif inherited from the Ancient Egyptians, subsequently embraced by the Romans.

The anthemion or palmette was a prominent spiritual symbol of life and renewal often adorning mausoleums and sarcophagi.

We’ve adopted the French word for ‘corner’ to describe the external angles in architecture typically emphasized by rustication in stone or stucco.

Clearly derived from ‘rose’, the French diminutive version of the word describes most smaller, stylized, round, symmetrical floral or plant ornament.

I love these two plaster rosettes from the Getty Villa, lotus on the left and acanthus on the right. 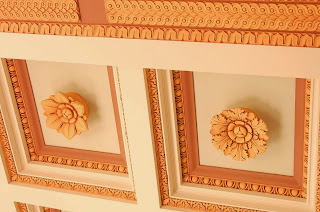 Vitruvius may get the credit because this linear band pattern features so prominently in Roman architecture; however, wave scroll designs go back to antiquity. Also called a Running Dog (I never liked that name).

Steve Shriver produces an interesting variation of the pattern freehand as a sgraffito motif in marmorino.

A projecting supporting member. Depending on the style and how it is used there are various designations

Modillions and Corbels, like the one depicted in the photo, are characterized by an S-curve whereas other brackets such as the Mutule from the Doric order are angular.