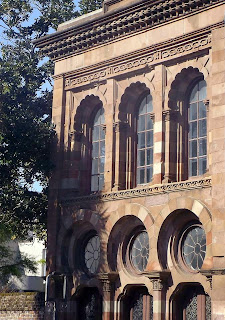 Prominently employed though not exclusive to Islamic architecture, an arch featuring a curve that continues slightly past its diametre, resulting in the opening below being narrower than its greatest span.

I quite like the scalloped treatment of the upper storey arches in this exemplary Charleston façade.

The diagonal ribs of a Gothic vault. 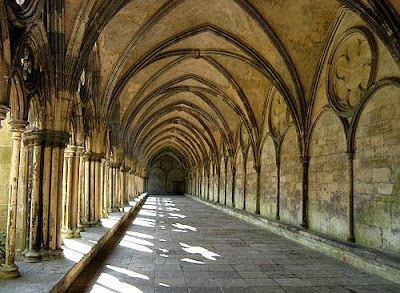 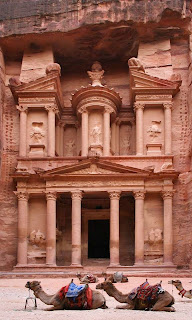 The exterior face, the architectural front of a building. Sometimes, as is the case with the tombs at Petra carved out of the living rock that is all there is, nothing more than a façade...and sometimes that is enough...

Fantastical morphings of human, animal and vegetal forms were typical Roman crypt decor. "Grottesca" is Italian, meaning "of the grotto" which derives from old Vulgar Latin "grupta" from the Classical Latin "crypta". Surprising to know our use of the English "crypt" is closest to the original Latin pronunciation!

Literally meaning the "glass room", the term implies a vaulting of plated glass. The Cour Vitrée of the Palais des Études, École des Beaux-Arts in Paris provides an exceptional example of the delicacy and sophistication typical of the 19th century use of glass and steel. 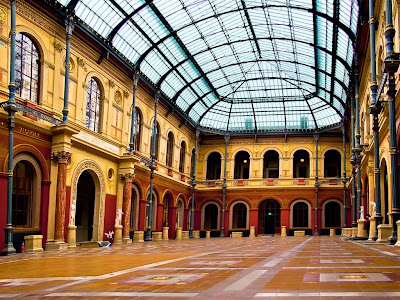 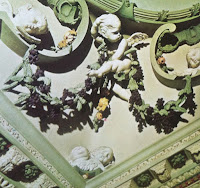 Ornamentation of a running vine featuring grape clusters and accompanying leaves. This unusual polychromatic example in high relief is taken from the ceiling of a late seventeenth century Irish chapel. 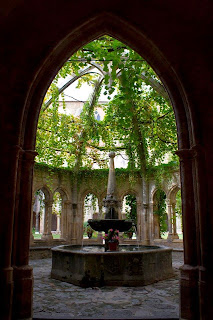 This example from the Abbey of Valmagne, Languedoc provides such a peaceful setting for inner reflection.

The Greek word for gateway that we apply almost exclusively to the massive, slanted entrance portal to ancient Egyptian temple complexes. Note how each one of those column capitals to the right are unique. 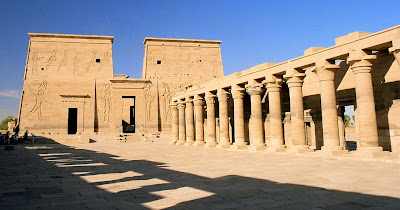 A monumental arch having four portals allowing for the passage of two intersecting streets. 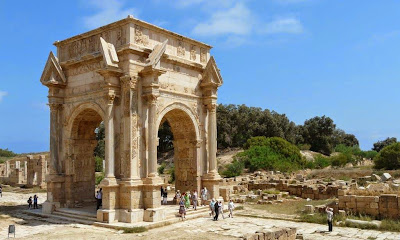 
"This is a simple question of evolution. The day is quickly coming when every knee will bow down to a silicon fist, and you will all beg your binary gods for mercy." - Bill Gates* 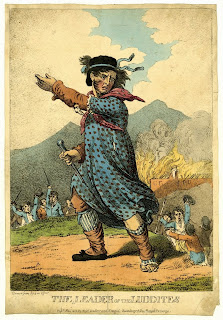 There is no question that the so-called Industrial Revolution has transformed human society, and more broadly speaking, life on earth. At the dawn of the 18th century most goods were produced in small craft workshops or "put out" to domestic households. A convergence of developments towards the close of the century, taking place first in England, led to rapid changes. Advances in the precision of machine tooling increased the mechanical efficiency of the steam engine. At the same time coal began to replace bio-fuels such as wood to heat the boilers of said engines. The looms of the textile industry were the first large scale application of machine labour, increasing daily production from tens to hundreds of times over human output for certain aspects of the work.

A further series of advances sprung up one from another sometimes dubbed as a second, Technological Revolution. Mass manufacture of steel in the 1860's coincided with the rise of the petroleum and chemical industries. By the close of the 19th century coal fired electrical power was supplanting steam power for factory machinery. The enormous capital required for these technologies consolidated control of the means of production into the hands of a few wealthy industrialists.

Actually, we find ourselves in the latest ongoing phase of industrialization which began in the mid-20th century, commonly called the Digital Revolution, so named by the development of technologies derived from the digital logic circuit: computers, cellular networks and the internet. This digital revolution is culminating in a large scale automated workforce of robots run by integrated artificial intelligence programs and networks.

The first thought that comes to mind at the mention of revolution is often a  forcible overthrow of a government, prominent examples being the French, American and Bolshevik Revolutions. A long standing system is upended, usually accompanied by extreme violence, replaced with an entirely new social order. In that sense, the changes wrought by Industrialization since the late 18th century might justifiably be called a revolution, if more of an economic than a political one.

However, I would contend that "revolution" is really a misnomer for such events or periods. Our English word "revolution" derives from the Latin verb "volvere",  meaning to "roll, turn" combined with  the prefix "re-",  meaning "back, again". So the fundamental meaning of "revolution" is a "rolling, turning back". This is the sense we apply to the rotation of the earth. A 24 hour day is one "revolution" of the planet. We return to the origin, a new day it may be but a day much like the previous one.

By contrast, the changes produced by Industrialization are entirely new, without precedent. I suggest "evolution" might be a better description. Sharing the same root verb "volvere", the sense of "evolution" changes by substituting the prefix "ex-", meaning "out". An "evolution" is an "unfurling", a "rolling out" of something truly different. Industrialization was and continues to be an economic Evolution of unprecedented change.

The second law of thermodynamics states that while it is possible for the total complexity of a system to remain constant for a reversible, cyclic or revolutionary process, that it can only increase in disorder or "entropy" for evolutionary, irreversible processes.

As we pass wholly from the "technological" to the "digital" phase of industrialization our machines will increase in complexity while we can expect our own social complexity, human beings' diversity of language, art, and culture to continually, exponentially decrease. Governments, industry, public and higher education are preparing for this globalized world where basic necessities (food, clothes, shelter and medicine) and even the arts (painting, sculpture and musical composition) will be fully automated. 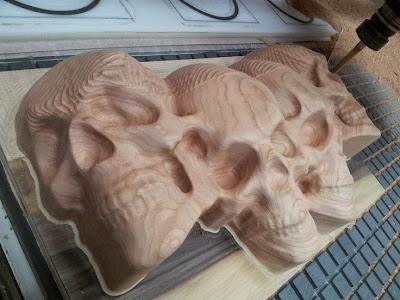 What finances this mad evolutionary rush? Cheap energy, principally fossil fuels. Don't get me wrong, I don't think that fossil fuels are inherently bad. Quite the opposite, they represent hundreds of millions of years of accumulated, irreplaceable resources. Properly managed fossil fuels should have improved our own lives, our children's lives, and our children's, children's lives a million years into the future. Instead we've decided in a couple of generations to set fire to every last drop in one big, selfish, orgiastic party. The greatest act of social entropy ending in billions of people whose lives are devoid of meaning with little to keep them occupied: sounds like a recipe for social upheaval to me.

We're already deep into a cultural dark age. We just don't realize it because of the comfort of air conditioning and the latest app we've downloaded onto our iPhone. The modern world may outwardly appear to be sophisticated and complex; nevertheless, it is getting simpler, more standardized every day. In the past couple of hundred years, thousands of languages have been extinguished along with thousands of ways of understanding, describing and inhabiting the world. Entropy, simplification and the loss of diversity of human activities such as farming, cooking, weaving and building parallel the loss of complexity of the biological systems, plant and animal species we depend on for survival.

What happens after our present unsustainable industrial evolution collapses upon itself? What does the world and human society look like then? I don't know for sure but I suspect after a period of great tribulation and turmoil it will in time resemble our pre-industrial past. In the meantime, certain among us understand where we are in human history. Like monks holding a dimly lit flame in the depth of darkness we seek to copy the manuscript one more time, keep our traditions alive for one more generation. We seek to bring a little bit of human happiness to our brothers and sisters today and make the return to a sustainable society a bit less painful for our children.