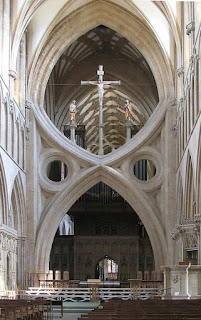 As far as I'm aware, Wells Cathedral is the only example. Not part of the original design, it was added almost 160 years after initial construction to stabilize a sagging tower on the verge of collapse.


The sacred burial mound architecture of Buddhist architecture typically enclosing sacred relics and providing a means for circumambulation and meditation. The main features correspond anthropomorphically to the seated posture of the Buddha as well as the 5 purified elements:

Earth - the square base

Air - the pole of the umbrella

The Void (Space) - The umbrella itself 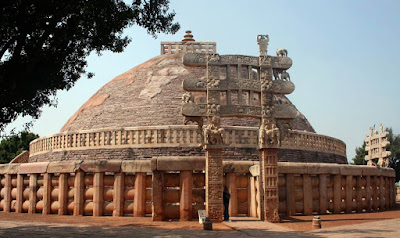 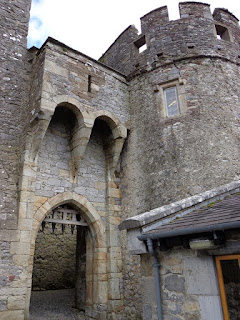 Of French origin, Portcullis quite literally means the "sliding door" referencing the defensive grating of iron and heavy timber lowered between the grooved jambs of a stone opening.

Machicolation means the "breaking of the neck" describing the floor openings or "murder holes" between corbeled overhangs through which rocks, hot oil and all manner of nasty things might be dropped upon a besieging force.

"The Murderess". A slender opening that allowed for the launch of projectiles with the least exposure, the most common form being an arrowslit.


An arch formed along an inclined plane where one impost sits higher than another. The rampant vault would include the ceiling thus formed. 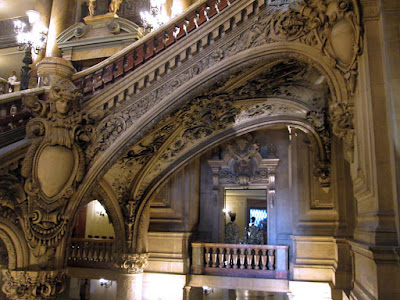 
A building exposing its timber frame as the principal means of structural support with masonry & plaster or wattle & daub infill. In long lasting examples the ground floor was composed of masonry construction so as to provide a suitable water table and the timber framing began on the first floor, hence the description "half" timbering. 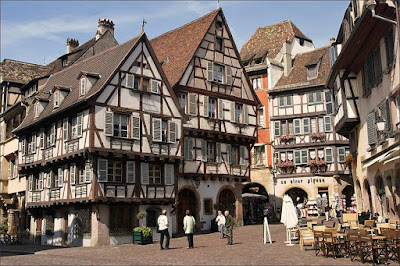 A low guard wall or screened railing at the edge of a roof or terrace. 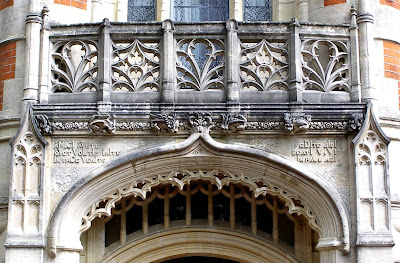 
A defensive wall of earth, stone or combination thereof. Originally dating to the 17th century, parts of the Quebec City rampart, particularly the gates have been rebuilt more than once. It is the only remaining walled city in North America. 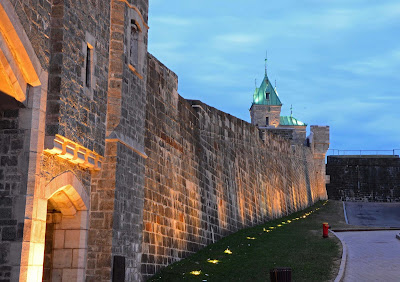 Posted by Patrick Webb at 4:15 PM No comments:


We live in the midst of an unprecedented period of human existence. In the Western world there is a previously inconceivable surplus of wealth. Setting aside the sustainability of the source of this wealth, its existence is indisputable. An unexpected advantage of this fundamental economical and societal shift is that, should we choose to live within our means, it is actually possible for some of us to live a life largely attending to matters of personal interest. More surprising yet, this frequently becomes quite profitable. A condition of life that was hardly conceivable even to the wealthiest of aristocrats of former times whose social obligations and managerial responsibilities placed limitations on personal pursuits.

For the past few years my new year's resolutions have been looking less and less like resolutions at all, while this one arrives well into spring. Long story short, I'm finally at peace with leaving life unresolved. Don't get me wrong, it's not that I've lost interest. Quite to the contrary, I'm more engaged than ever! However, my motivation has shifted from goals to interests. Paradoxically, this shift in consciousness is having the unexpected consequence of more quickly surpassing what previously had been affirmed goals. Expressed as an inversion of musician Janis Ian's sentiment: "I've gained the love I sought to lose."

I'm still participating in the educational initiatives, consultation and advocacy for craft that I've spoken about over the years. Likewise, I still have my hands regularly on the tools. However, below are a few "interesting" directions I'm drifting towards in 2016:

Plastering is an investment in hand applied skill I've had the pleasure to see mature over the years. What currently interests me is expressing that accumulated craftsmanship artistically on collaborative projects with friends and colleagues. I'm actively pursuing Scagliola projects together with artist Jim Gloria, a recognised master of the medium. We're currently negotiating an architectural project of Ionic columns as well as meeting with a traditional iron smith to collaborate on furnishings here in Charleston. I expect to have news and images worthy of their own article soon!
Jim Gloria Scagliola

Jeffrey Mims is a personal friend, a brilliant representational painter as well as founder and director of the Academy of Classical Design in Southern Pines, NC. Jeffrey has invited me up to his atelier this June to take the lead in applying traditional lime plaster "grounds" for the barrel vault in the central cast hall. That accomplished I look to fall back into an apprentice role, assisting as I'm able in the design and painting of the fresco itself.
The Academy of Classical Design

In regard to ornament, one of the major ethical issues that I've had with projects over the years is that my work and that of my colleagues has more often than not been proprietorially seized, legally converted as the intellectual property of clients with the imposition of NDA's, non-disclosure agreements. I was approached last year by John Paul Hughley of Building Art about the creation of a range of plaster ornament as objets d'art, drawing from the local culture of Charleston to be sold with a provenance recognising the artists and craftsmen responsible. I'm proud to say that local artist Jill Hooper did a beautiful job sculpting our initial effort, the pictured crania (inspired by Charleston's Market Hall). Furthermore, I was privileged to work with her in creating the moulds and castings. I'll continue to work with Jill as well as two additional architectural sculptors that I look to announce shortly.
Jill Hooper Fine Art

Most of you all know that I love to write. A couple of years ago I was approached by Walls & Ceilings magazine to write a series on the history of plaster in architecture. Although they're the leading trade publication for the drywall and EIFS industries, they're recently keen to publish more articles about traditional plastering. It has developed into a fruitful relationship. With the completion of the series I've been asked to provide a regular column and even provide some webinars for ongoing education. Look forward in April to a fun article on plaster restoration, "Confessions of a Plasterer".
Walls & Ceilings

The Traditional Building Conference Series graciously invited me to speak at Duke University this past November on plaster as an architectural specification as well as the broader topic of possibilities for the improvement of the educational infrastructure of craft at a national level. Public speaking is a work in progress for me; however, I believe it was well received and I was subsequently invited to contribute a monthly series in Traditional Building Magazine. "Traditional Plaster 101" will attempt to demystify plaster materials by discussing their composition and chemistry in easy to comprehend layman's terms.
Traditional Building Magazine

Next, we're just at the point of inking a book deal entitled Essential Natural Plasters. "We" being myself, natural plasterer Mike Henry and natural builder Tina Therrein. Noses to the grindstone, we have a projected release date of Fall 2017.

Finally, there is a new essay series I've begun here on Real Finishes just for personal gratification: A Craftsman's Philosophy. This is an outgrowth of my ongoing personal studies in relativistic physics, quantum mechanics, sacred geometry, as well as Western and Eastern philosophies, to synthesize a personal philosophy through the experiential vehicle of craft. Attempting to refine my ideas sufficiently enough to be coherent on the page is equal parts excitement and madness. Long term, I'm very interested in writing a book on the subject. In the meantime, I'm open to a publication outlet as the essays are written. If anyone has suggestions along those lines I'd be much obliged!

Personally, this shift towards more artistic and intellectual pursuits comes at the perfect time. Plaster can be physically demanding and it feels reasonable now that I cut back my hours on the tools to focus on education and highly skilled aspects of the craft. In that spirit I'll re-extend last year's invitation:

If you are a craftsman, designer, architect, educator or student in one of those fields and would like to collaborate please feel free to contact me at patrick@realfinishes.com 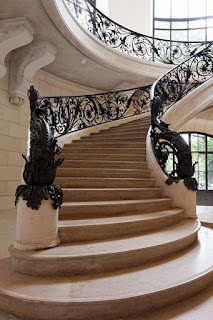 The post at the head, foot or landing of a stair to which the handrail is attached and supported. When there exists immaculate taste and a love of craftsmanship they can get quite elaborate. 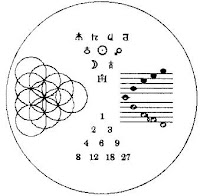 
In a classical liberal arts program these are the "four paths" of the higher mathematical studies and search for truth.

In our modern, hyper-rational educational system a disproportionate emphasis is placed on the purely conceptual approach to number, the least instinctive and humanistic of the four and why most students dread math in my opinion (Polynomial long division anyone?)


ARITHMETIC - the all to familiar number in concept

HARMONY - number in time or sequence

COSMOLOGY - the dynamic study of number in time and space 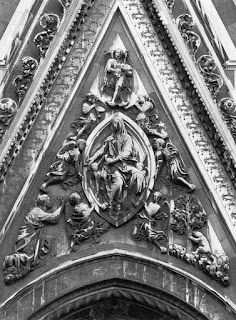 
The upright almond shape formed by the two radial arcs, each passing through each other's centre. The shape has held sacred meaning at least since Egyptian times and geometrically is the key to unlocking several regular polygons, the golden section and other fundamental spatial forms.


A V-shaped stripe of ornamentation forming a zig-zag pattern, the best examples of which were employed during the Norman period, the name for Romanesque architecture of 11th and 12th century England.


The semi-circular, sometimes semi-elliptical window above a doorway characterized by radiating muntins.

If you look carefully, this recognizable example quite literally, if subtlety stylizes the rays of the sun. 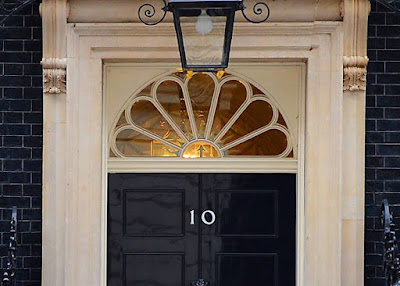 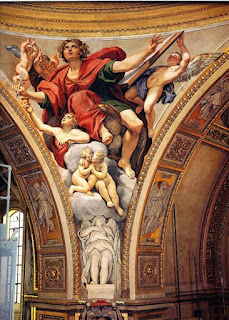 
The French word for 'plume', panache came to be used for flamboyance and reckless courage, manifested in architecture as the highly decorated triangular surface of a pendentive.

Simona Albanese captured this amazingly detailed photo at the basilica Sant'Andrea della Valle when it was under renovation.


A circular portal, typically leading to a garden courtyard in traditional Chinese architecture. 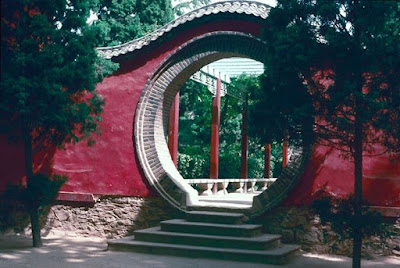