The Status of the Traditional Craftsman 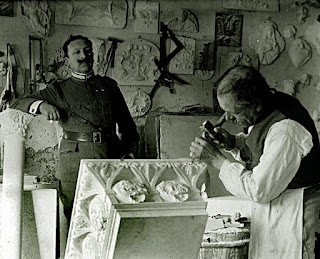 By any conceivable measure, low. Often young people who are trying to figure out their life will ask me if traditional craft might be a viable path for them. My response is basically as follows: if social status is important to your sense of identity, don't walk away from pursuing craft...run and never look back.

There are a few diminished, crumbling legacy infrastructures in place for learning craft sporadically limping along around the globe. Nowadays these typically function as half way houses for wayward youths. However, for most folks pursuing a life as a traditional craftsman there is no support, it's by and large a self-directed process. Obviously, there is very little in the way of a traditional craft culture remaining in the modern, industrialised world. This was certainly my experience in learning traditional plasterwork. Years of experimentation, trips at great expense to the UK, France, Italy, Morocco to try an pick up dribs and drabs of knowledge from folks who are struggling for their own existence and only half-willing to tolerate your presence. Why should they share anything with you, their hard earned pearls before swine? Not exactly a recipe for the next Michelangelo.

Then there is the architectural side of things. Once again, plan on doing the heavy lifting yourself, pouring over old out-of-print books, learning the geometry inside and out that gives form to your material. Don't count on any support from the architectural establishment or academia. There is an hierarchy in place and you'll always be at the bottom of it. It's not personal, actually you're not thought of in terms of an individual at all. One must understand that a traditional craftsman is not a professional. They're literally unentitled. Most lack an university education and if they do well, it's even worse. Fools. What a waste. So it's now standard practise that craftsmen are expected to sign non-disclosure agreements having the work of their hands be the intellectual property of others whilst the professionals get to appropriate and display said "work" as their own.

Yes, I've heard the arguments that some craftsmen earn a better living than some college educated folks. First, this is mostly bollocks. Typically one can work for low to mediocre wages for a semi-industrialised craft business. True enough, the owner of that business, who more likely than not knows nothing about the craft, never getting his hands dirty, might be making good money and getting awards, praise, and respect. The craftman doing the work? Not so much. Alternatively, the independent path of "the man in the van" isn't better off. He either has to have the entire infrastructure of a large business to function (insurances, incorporation, licensing, accountants, etc.) or he is by legal definition a criminal living an off-the-books, black market life.

So if you're a young person that is really into craft but social status is also very important to you I would suggest you pursue a path of being a traditional architect, preservation technologist, or if you're entrepreneurial, ambitious, and have access to capital maybe even buy a craft-like business in the manufacturing industry. You can make some good money and will have an identity in society that is respectable while fulfilling your craft fetish. Win win. However, if you're very good at math, dexterous, anti-social, value your independence, not giving two shits about what other people think then perhaps you can join the counter-culture, throw your life away into the decades-long process of mastering a traditional craft. Heaven knows there are plenty of spaces open.