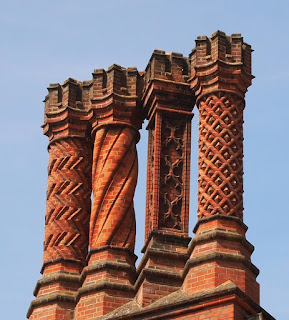 Rubbed and gauged brickwork is the highest artistic expression of the medium and craft. Appropriate bricks are fired at low heat, made of the finest clay, sieved of any rocks.

They are then hand "gauged" or cut to the appropriate shape with axes, saws, rasps etc. and subsequently "rubbed" to a precise fit and finish against a harder rubbing stone. 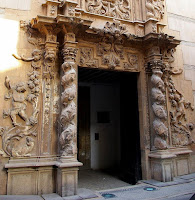 A column whose shaft is twisted and often enriched with running vines. Having a purported origin from the temple of Solomon in Jerusalem, the spiral column is often found as the support of the canopy over the high altar of a Catholic church. 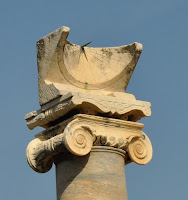 HEMICYCLIUM, GNOMON
A hemicyclium is one form of an ancient sundial in the form of a concave quarter sphere or more accurately conic section.

The shadow casting rod or "gnomon" is oriented so that it points north and is parallel to the rotation axis of the Earth, marking the surface of the hemicyclium.

The appearance is intentionally designed to stylize stalactites in symbolism of Muhammad having received his revelation from Allah, by means of the angel Gabriel in the Cave of Hira outside of Mecca. 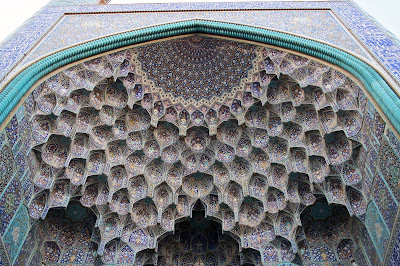 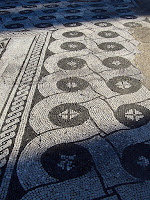 This guilloche patterned example from the Roman port city of Ostia is about two thousand years old.

Gorgons were seen as simultaneously endowed with beauty and terror, the writhing snakes of their hair, a symbol of fertility and a talisman against evil influences.

The name of the iconic gorgon, "Medusa" literally means "protector". The head of the Medusa was utilized as a symbol of royal "aegis", shield or protection. 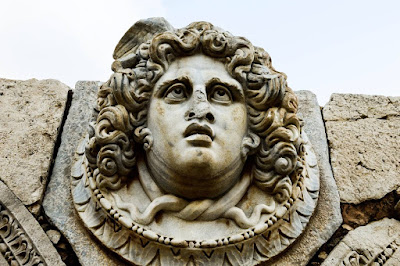 Posted by Patrick Webb at 4:45 PM No comments:


Without question the craft of plastering has always held widespread practical utilitarian value to our built environment. Stuccoes rendered in exterior provide a sacrificial function, protecting vulnerable substrates from erosion and water damage. Plaster applied inside insulates, attenuates sound and provides a sanitary, durable wall surface. Extrusions of profiles in plaster create mouldings that add architectural interest, helping to delineate space by means of shade and shadow. However, among the many craft specializations of the Decorative and Applied Arts, plaster is by far one of the most expressive mediums. We'll take a quick overview of the Art of plastering via some of the traditions still practiced in Decorative Plastering.

Fortunately, two of the most commonly used minerals to produce plaster, lime and gypsum, are inherently very white and accept color readily. A few clays are also a light grey and can be tinted to produce a broad, if muted range of colors. Other clays are naturally occurring in a variety of earthen colors such as sienna, umber and ochre that most of us love just as they are.

Marmorino, meaning "little marble", is an Italian tradition of integral colored lime putty plastering inherited from the ancient Romans. Enjoying a 20th century Rensaissance in the Veneto it soon was popularized once again in Italy and now throughout the world.

The French have there own long standing tradition of adding colors and aggregates to plaster. The French plaster is based on gypsum which is naturally more matte than lime. So, instead of marble  the French tradition emulates limestone, called Stuc Pierre, meaning "Stone Stucco". The surface of Stuc Piere is typically shaved with a "Berthelet", a hand held plaster razor, and often scored to create joints in imitation of ashlar masonry. Virtually every culture has developed its own artistic flare using color and texture with plaster: Shikkui in Japan, Tadelakt in Morocco, Enjarre in Mexico to name a few additional examples.

﻿There are two principal approaches to creating ornamentation in plaster. The first is reductive. Morocco has cultivated master artisans of  "gebs", otherwise known as Gypserie, a wonderful tradition of carving into gypsum plaster that is very akin to wood carving, using similar chisels and gouges.

A more widespread reductive method applied to a variety of different plasters around the world is Sgraffito, carving plaster in very low relief. Sgraffito relies on contrast of color between plaster layers for the effect and is a relatively inexpensive way to add a lot of visual punch.

Of course there are the additive forms of ornamentation for which plaster is famous. The finest ornamented stucco is done by hand, in situ. Lime is the preferred medium although sometimes a quantity of gypsum is added to speed up the work and create higher relief. The most awe inspiring work left by the ancient Romans and emulated in the Renaissance was all painstakingly carried out by hand by armies of sculptors. These must have been very exciting times to be a plasterer! As mold making technologies increased in the 18th century, in situ ornamentation became largely displaced by pre-cast ornamentation in gypsum plaster. Gypsum has a rapid set, just a few minutes, so once time has been invested in a master model, many copies can be made quickly.

There are a few really special applications of decorative plastering that could easily take a lifetime to master. One of those is Scagliola. Scagliola is a technique of emulating marble, typically with gypsum plaster. The artistry required is tremendous. Just matching colors as they occur in marble or developing your own color palate is a challenge in itself. As the technique requires cutting, folding and stacking loaves of plaster in various orientations repeatedly, you must continually visualize what is happening inside, how all of those layers are coming together in a natural way, recreating the subtle variegation of color, veining, stratification and fracturing that occur in marble are all separate skills. 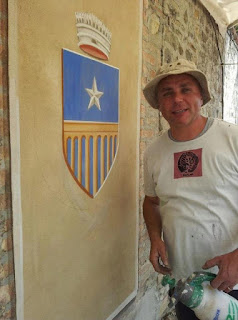 Perhaps the highest artistic expression of plaster, one that blurs the line Buon Fresco. Painting mineral pigments into lime plaster while it is still fresh takes incredible understanding of materials. The plaster must be prepared in a way so that it maintains a consistent level of dampness for as long as possible. Fresco can be as simple as brushing two or three coats of a mineral wash into a completed wall to give it a soft, cloudy, parchment effect to most elaborate works of fine art and trompe-l’œil.

What is important to recall about all of these various decorative plastering traditions is that many of them can and are used in combination. Scagliola might be pressed into moulds to make ornamental pieces that resemble carved marble. Marmorino or a similar fine lime putty plaster is the grounds for painting Buon Fresco.

The art of plastering really has not changed much in thousands of years. We use the same commonly available materials and techniques we always have. And although to become truly expert at the various arts of decorative plaster requires patience and practice, the truth is they are quite humanistic endeavors, appreciable and accessible to most everyone.