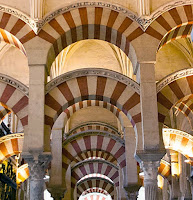 The individual wedge-shaped arch stones or bricks whose converging sides are cut according to one or more radii depending on the type of arch or vault. 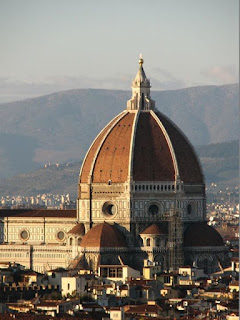 Repetition with variation. This echo in the parts of what manifests in the whole or climax is well exemplified in the minor domes of Santa Maria del Fiore which prepare the viewer for Brunelleschi's great dome that would otherwise overwhelm the composition. 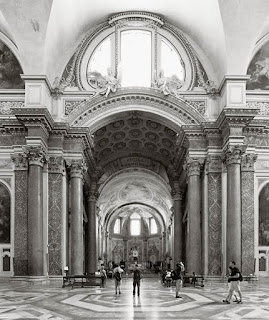 A large semi-circular window typically divided by two mullions or alternatively four mullions into an odd number of compartments. The core of the Thermae commissioned by the Roman Emperor Diocletian is largely preserved, windows included, within the Basilica Santa Maria degli Angeli.

An oriel balcony of Islamic architecture typically projecting over the street that features elaborately carved screens allowing for the passage of light and air while offering privacy.

The design was maintained and incorporated into Western architecture on the Iberian peninsula and subsequently in Latin America such as the early 20th century example of the Archbishop's Palace in Lima, Peru. 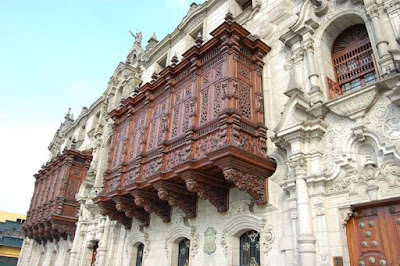 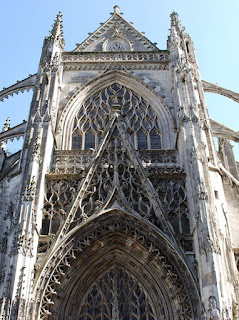 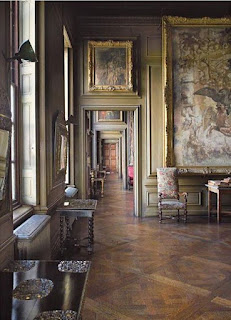 French for "to thread" (as in a needle), architecturally it refers to a suite of rooms directly connected, the doors aligned along a common axis. Frequently employed in palace architecture of the Baroque period, guests would be escorted to the farthest room their rank would permit. 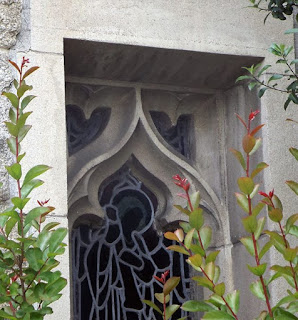 A compound curve combining a concave and convex curve in a continuous line, otherwise referred to as an S-curve. They are often used to form moulding profiles, arches, roofs or a tracery as in this handsome circa 1923 Gothic Revival example I saw recently at All Saints Episcopal Church in Pasadena, CA.

A large, circular window often placed in the gable of a church or cathedral, with tracery laid out in a radial pattern and an interior window of stained glass.

This Norman church in Kent, England features the most amazing of grotesque ornamentation. 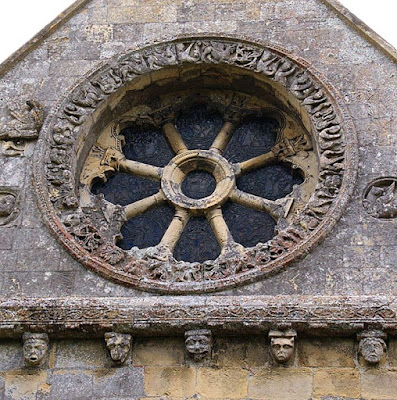 Posted by Patrick Webb at 2:15 PM No comments:


Out of love and concern for the truth, and with the object of eliciting it,  the following theses will be put forth for public discussion: 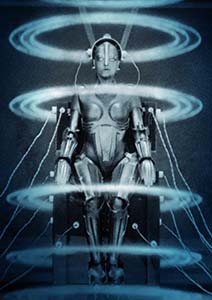 The cult of reason. The attempted materialization of an imagined, simplified, rational world of pure order. A rejection of the infinite variety clearly evident at the subatomic level, among ourselves as human beings, extending to the scale of galaxies and the universe itself.

The cult of separation. Endless contrast. The failure to distinguish harmony from monotony. Unending rejection. The inability to recognize any measure of continuity as anything but repetition.

The cult of genius. The deification of the individual. Unique expression of personal vision is held as the unassailable ideal even in the face of detriment to the civic good.

The cult of the future. Perpetual novelty. The obsession with striving for tomorrow. A future where human interests, desires and needs of living will be nothing like they are today.

The cult of reflection. The obsession with mirroring what is perceived as the spirit of our times: fear, displacement, lust, shock and uncertainty. An abandonment of exercising the moral responsibility to encourage, comfort and uplift.

The cult of technology. An unfounded yet intractable belief that widespread implementation of technology will continue to improve human lives. Faith in technology extends to the belief  that the present social, ecological and health crises directly attributable to technology will be solved with future technologies.

The cult of ugliness. The wholesale rejection of beauty as an universal ideal. Individual taste is all that remains, subjective and relative, abdication from any aesthetic accountability whatsoever.

The cult of patricide. No generation has ever portrayed their forefathers so ignorant, unenlightened, and unevolved as our modern one. Not only is it acclaimed that there is nothing of value to be learned from them, any such attempt would only taint, contaminate and distract from the current enlightened viewpoint.

The cult of intellect. The private universe of the Modernist mind creates its own rules, structure and narrative. Anyone who does not understand and appreciate the results is condescended as uninitiated, ignorant or mentally deficient.