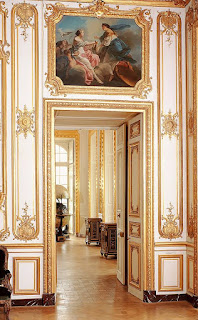 The particularly enriched frame enclosing a door, window or fireplace. The horizontal top piece or lintel is called the TRANSVERSE whilst the vertical supporting members are called the MONTANTS or ASCENDANTS.


A parapet featuring MERLONS, upright defensive extensions of a fortification alternated with lower, open intervals called CRENELS. Such a parapet or battlement is said to be 'Crenelated'. 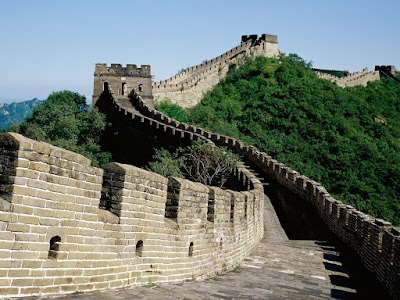 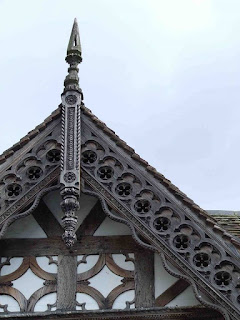 
In a traditional timber frame building an oft elaborately carved and ornamented fascia board that hangs down from the projecting gable so as to mask and protect the otherwise exposed purlins supporting the roof. 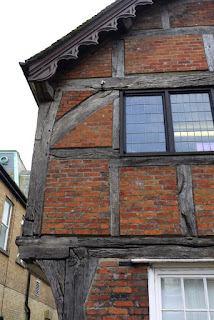 
In timber frame construction Noggin or Dwang refers to the horizontal bracing pieces rebated between the vertical wall studs.

The Nature of Tradition


There appears to be a great deal of variation if not outright confusion surrounding the meaning of the word 'tradition'. Ask around for a definition and you're likely to receive a response along the lines of  what tradition means to 'me'. Like so many words, such as art and beauty, the contemporary use of 'tradition' has been so extended and personalised as to be diluted of any clarity of meaning or any shared objectivity. Taking beauty as an example, an organised spreadsheet or devilishly orchestrated hostile takeover might be touted just as 'beautiful' to one beholder as a Provençal field of lavender in spring is to another. Alternatively, a can of excrement quite likely will be considered as much 'a work of art' as a painting by Van Gogh; individual expression being the minimum, really the only requirement to be so called. 'Tradition' I would contend however, is fundamentally not an individual enterprise.


As American as Apple Pie

Who doesn't love the buttery, flaky crust filled with the sweet, tarty goodness of green apples? I could hardly think of a more recognised symbol that captures the spirit of particularly American tradition. It's not a tart, a torte or a strudel. Neither will blueberries nor rhubarbs do as an alternative filling. It's apple pie and it's American as it gets. Apparently, Americans have been baking these pies since the days of the Puritans, well before there was a United States. Apple pie remains one of the few desserts many Americans can still make from scratch. Along the way suet got replaced with butter and spices like cinnamon and nutmeg were added as they became available. Subtle changes, improvements came along as recipes were passed down from one generation to another over the past 400 years. 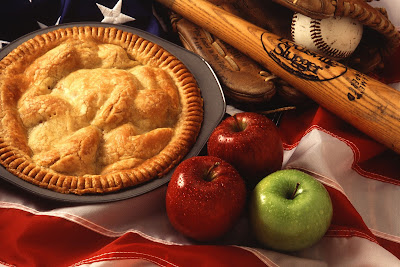 So, what about the Twinkie? You know, the "Golden Sponge Cake with Creamy Filling" currently owned by the private equity firm Apollo Global Management. Is the Twinkie an American tradition too?

Hey, what if I want to make a Twinkie!
Well then it's time to go shopping. What will I need? Ok, here's my list:

Obviously, this is not going to be easy but let's say for the sake of argument I can gather the ingredients less the unrevealed "natural and artificial flavors". Then what, can I make a Twinkie? I'm sure I could make some kind of cream filled golden sponge cake but would it be a Twinkie? My understanding is that the manufacture of the Twinkie is not so easy. To achieve the signature shape and look requires a massive amount of costly industrial infrastructure that entails complex government regulation and permitting. But again, for the sake of argument let's say I cut a few corners on the ingredients and can produce a reasonable facsimile with the equipment available to me in my kitchen at home. Would I be able to bake, market and sell Twinkies?

Perhaps the Twinkie is a tradition but I'll argue that it is not a tradition in the same sense that apple pie is a tradition. Twinkies are only a tradition of consumption. In fact, I would go further in asserting that Twinkies and most all mass produced products of industry are anti-traditional; they undermine food, architectural, textile and many other traditions. Furthermore, they tend to consistently manifest the following 3 characteristics:


"Never does Nature say one thing and Wisdom another"
- Juvenal, 2nd century C.E.


However, allow me to digress and return to the subject of tradition. Our English word tradition derives quite directly from the Latin "tradere", literally meaning something given, "dare" over, "trans". Since its first recorded use it has always carried the sense of something "given or handed over", particularly from one generation to the next, such as recipes from a parent or grandparent to a child or the skills passed on from a master to an apprentice. 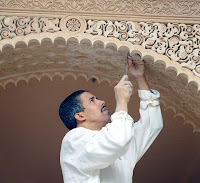 Traditions are the original "open source" know how belonging to the "commons"; millions of minds addressing themselves to the needs of, and constantly evolving and improving the pleasure of everyday life. Furthermore, traditions have proven to be eminently sustainable. For tens of thousands of years mankind had lived in accord with nature because it saw itself as nature in stark relief to Modern society's standardised, proprietary, heavily capitalised industrial processes that treat humankind as one big marketplace and the earth as little more than a mine from which to extract every possible resource, unsustainable indefensible behaviour that will inevitably lead to environmental collapse. Impersonal corporations target for elimination, by inhuman systems of competition and bureaucratic decree the inherited legacy of tradition that took our fathers thousands of years to build, the cultural know how to live at equilibrium with nature just when we'll need it most.

Are you a traditional craftsman, farmer, musician or the like? Think of yourself as you truly are: at first the beneficiary and now guardian, trustee of hundreds if not thousands of years of investment, accumulated human wisdom of how to live in harmony with nature as an authentic human being.

Craftsmen of the Tao


In my opening essay in the series, "A Craftsman's Philosophy",  I controversially contested the Enlightenment classification Homo Sapien, "the wise man" and proposed an ancient point of view, Homo Faber or "man as maker" as being more representative of human beings. In truth, in my zeal to make a point I was being a tad insincere, attempting to persuade you, the reader of a conviction I do not myself hold. For example, it could be argued that our ability to cultivate, to nurture life and growth, is equally characteristic of human beings and just as critical to the rise and continuance of civilisation. By promoting one classification over another, do we not in many respects diminish the totality of who we are?

Over two millennia ago a method seeking escape from this seemingly intractable morass of nomenclature began to coalesce. The Tao (道) purports to be a path of liberation from the artificial world of convention, a deliverance into the visceral experience of reality. As I will subsequently consider, this change of perspective has many implications for the craftsman.

"Nature does not hurry, yet everything is accomplished." - Lao Tzu

The Chinese word for nature, ziran (自然), literally translates something like "of itself so". The sentiment of expressing it thus is of nature conceived as an unhurried phenomenon, entirely spontaneous. Closely allied with nature is the concept of wu-wei (無爲), the "not doing" or "not making", yet implying growth as an internally generative cultivation. This is not a concept of nature as separate and outside of ourselves as humans, since we too quite literally grow ourselves. In reality, our capacity for reason depends wholly on the self-generated brain and body, our relatively limited capacity for conscious thought is but a staked tent resting upon the mountain of our unconscious, or perhaps better stated "super-conscious" mind, a highly complex system that grows and maintains the myriad of working functions and sense perceptions that we too easily take for granted.

I find that traditional craftsmen are almost universally interested in making "good time". However, the emphasis shifts from "time", that is to say efficiency, towards the "good" or quality of both the experience and of the work itself. Thus, neither excessively planned nor chaotic, the efficacy of craft adheres to the organic process of nature generally. For the craftsman the dynamism of the crafted object is in fact an extension of their own, its life existing vicariously in the moment of generation.

The formal, global implementation of theoretical standards for material and methods has significantly undermined traditional craft. Even in the presence of a tremendous inventory of safe, durable, beautiful hand crafted architectural heritage, the prevailing practise is that if a construction material or method can not be classified, labeled, numbered or otherwise be made to strictly adhere to scientific convention then it is deemed uncontrollable, potentially dangerous and bureaucratically illegal. Under this hyper-rational mindset, that a traditional material or method does work is deemed irrelevant if it can not be explained how it works within the abstracted limitations of convention.

The Tao offers freedom from the unyielding controls of convention:

Instead the Tao urges the cultivation of Te (德), commonly translated virtue but with the sense of an inner potency implying mastery. Interestingly, masters in this sense are really guides. They help the student to find the path for themselves. The path is really nothing special, just allowing oneself to be an authentic human being. The path has been followed by craftsmen all over the world since time immemorial. A master craftsman can not express in words enough to teach an apprentice much. Little can be learned by thinking, almost everything by doing. True mastery comes from direct experience admittedly benefited by guided instruction.

The path transcends in a very comprehensible way even space and time. It makes possible means of communication far more direct than those available through conventions, even language itself. For example, you could drop a traditional master mason from our English speaking world in a remote Tibetan village today to work alongside a team of local traditional masons in building, say a monastery. Without being to convey as much as hello they would be up and running in no time through sketching and demonstration. Furthermore, the same holds true if you were able to deposit our English mason back in time 2,000 years ago. As dear as we hold language, it and other conventions tend to ensnare us within their limitations, preventing us from the full richness of human experience.


As any craftsman eventually learns, spontaneity and mastery can not be forced. One has to abandon self-consciousness. But the irony is that this can not be done consciously! Attempting to be spontaneous on purpose, thinking and willing yourself to do so, only amplifies the difficulty. How to escape this mental bind? As ancient philosopher of the Tao, Chuang Tzu said, "A path is made by walking on it."