Enigmatic, exotic, artisanal, rustic, seductive…just a few of the adjectives that attempt to capture the essence of Tadelakt, the plaster of Marrakech that has in recent years fascinated the imagination of the Western design world, first in France (logically as Morocco is French speaking and a popular destination for holiday and vacation homes. Also, many French designers I must admit have impeccable taste) and subsequently throughout the EU and US. A number of years ago I accompanied a team from Venice organized by a true master of the Italian tradition, Franco Saladino, to study Tadelakt application and manufacture. I immediately fell in love with the food, the music, the “terroir”, the culture and of course the plasterwork. One of my plaster colleagues in the US, Ryan Chivers, made a similar visit and was likewise enthralled. Ryan and I will do our best to share what we’ve learned of its history, manufacture and application.

The word Tadelakt is an English transliteration of the Arabic “تدلاكت”, meaning “massaged” or alternatively “rubbed”, “kneaded”. The name is meaningful and a big hint to what Tadelakt is all about. Yes, it is a type of plaster that has certain properties but more significantly it is a traditional practice of application that involves a bit of elbow grease. Lime burning for plaster has been going on for a long time in North Africa. We know Egypt for example was using gypsum and lime plasters for the construction of the pyramids and other structures dating back 5,000 years ago. However, it was under the Almoravid “Berber” dynasty of the 11th century based in Marrakech that artisans began to use the Tadelakt method of finishing the locally produced lime to waterproof the royal cisterns.

The limestone used to produce Tadelakt comes from the High Atlas Mountains to the east. The limestone is argillaceous, meaning it contains a relatively high percentage clay. Also, there is a small infiltration of amorphous silica making Tadelakt lime slightly hydraulic. Combining its natural properties with traditional application methods Tadelakt’s waterproofing qualities were subsequently put to decorative use in exterior façades, small drinking vessels and famously the “hammams” or public bath houses.

The Tadelakt "factories" are found at the foothills of the High Atlas Mountains. The factories are little more than a flat stretch of land with a series of cylindrical pits lined with adobe bricks. Each pit has a tight tunnel entrance leading to the floor of the pit so fuel can be added during the baking. The limestone is broken down to more or less grapefruit-sized pieces. There is no mechanical equipment so all the work is done by hand breaking one stone against another. Then a vault is carefully arranged by hand over the pit. It is very important that the size of the stones are the same so that there is an even baking. Too large and the carbon will not be completely driven off. Too small and there is a vitrification of the silicates. Either way you can end up with a lot of useless chunks.

This is precisely the same process outlined by Vitruvius and utilized by the Romans two millennia ago to produce lime plaster. The Arabs had preserved many of the old Roman texts and during their golden age translated many Greek and Latin documents into Arabic. Tadelakt is essentially a Roman cement utilizing limestone local to Marrakech. The very effective fuel for the furnace comes from the surrounding fields, a plentiful brush high in natural oils that are set aside and dried weeks in advance. The temperature is raised to about 950°C (1750°F) which is maintained for at least 24 hours under the careful supervision of an experienced baker. There of course is no thermometer. He determines the temperature by observing the color of the flame and the smell of the smoke.

After another full day of cooling the vault is broken down and carted away. If the limestone was properly baked, the stones will fall to powder by lightly spraying with water. The reaction is quick producing a good amount of heat, though not as much as a pure quicklime. Finally it is put through a series of screeds to remove over or under cooked chunks. This is typically done in the open air by two men holding and shaking a large manual screed approximately 3' x 8' with an assistant throwing plaster on it. The Tadelakt lime will stay highly active if quickly packaged and stored to prevent carbonation with the air.

Application of Tadelakt is a multi-step process. The essence of skillfully applied Tadelakt is timing. Understanding when to do each step is something that is difficult to describe and requires firsthand experience. With Tadelakt, there are many ways to achieve the same result, depending on the tools and materials that are being used. This description is meant to describe the Tadelakt process as it is done traditionally in Marrakech.

The traditional tools used in Morocco, are very simple. A large masons trowel is used for mixing. A bucket of water and large brush are used to wet the walls. The masons trowel is used in combination with the “Taloche”, a wood float that can be used as a hawk or a trowel to hold or apply the material. Once the material has been applied, the wood float is used to flatten and fill the surface. The masons trowel is then used to initially smooth the surface. The “Galet” is a hard river stone that is usually flat on one side and polished smooth. Various pieces of plastic are used for a final smoothing. One is a stiff flat piece with a polished edge. Also used is folded up sheet plastic that is used for smoothing round shapes.

The Tadelakt is traditionally mixed very simply by hand. The material is screened through a fine screen to remove the largest pieces of aggregate. The powder is added to the water and mixed well with the mason’s trowel. The material is mixed surprisingly thin to account for the relatively high suction of traditional substrates. Pigment is added dry after the Tadelakt is mixed. The dry pigment is sprinkled with a little water then thoroughly mixed in.

The first step in the application process is to test the absorption of the background. Tadelakt traditionally was applied to highly absorbent backgrounds such as thick earth, lime, or cement walls. To reduce the suction, a small amount of water is dashed onto the surface. Before large scale application, a small dab of material is applied to the wall to ensure that the background is taking up the water at the proper rate. The Tadelakt is initially applied in multiple thin layers one after another to achieve a final thickness of about 4-6 mm . The masons trowel is used to apply and the wood float is used as a hawk to hold the material. Alternatively, the wood float can be used as a trowel with the masons trowel used to scoop the plaster onto the float.


After a further period of drying, the Tadelakt is ready to be polished with the stone. This process can begin when the surface is just barely movable. Polishing should continue as the surface dries until a smooth surface has been achieved. At this point, any small holes or imperfections can be filled with the trowel or the plastic skimmer and rubbed smooth with the stone. When the stone polishing is complete, and the surface has dried enough to have a slight tack, it gets burnished with the plastic skimmer. This is done horizontally, then vertically. The plastic gives the surface a high gloss and is the final step until the soap is applied the next day.

The Tadelakt is left to dry for 12 hours or more, usually overnight. The surface is thoroughly coated with soapy water and immediately polished with the stone. The surface is polished again with the stone. At this point, firm pressure is used to consolidate the surface. After the whole surface has been polished, and most of the soap has been rubbed in, a soft dry cloth can be used to wipe off any excess soap. It is common to apply several subsequent layers of soapy water with a brush in the days following the application. This step aids curing and carbonation and adds a layer of luster to the Tadelakt. It is also common to apply a coating of wax after a 30 day carbonation period. 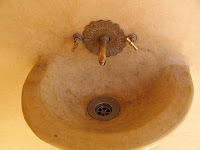 Much of the excitement surrounding Tadelakt stems not only from its intrinsic beauty but also its waterproofing characteristics. I always like to caution folks though that Tadelakt is a veneer plaster application and can’t possibly be waterproof by itself. Rather, it forms the last exposed surface of a waterproof system. In Morocco and even in the EU terracotta, brick or cement block with a brown coat of hydraulic lime or cement stucco might serve as a typical support. However, timber frame construction is the norm in the US so it is important to make certain that the framing is very secure with no flex or movement and the substrate is appropriate. Cement boards or metal lath are well supported solutions adopted for tile and stone that can also be useful for Tadelakt.

I can’t say enough good things about the Moroccan “Savon Noir”, black soap. It is a natural olive based soap sold by the kilo in the bazaars and used for everything from personal hygiene (my shampoo) to all manner of washing in the home. It comes as a thick paste but easily emulsifies in water if mixed and left overnight. As Ryan mentions it is very important to apply the soap the next day before the Tadelakt begins to carbonate. The action of the galet rubbing the soap into the Tadelakt deeply impregnates the plaster. The soap does not form a film like wax, however. The alkalinity of the lime chemically reacts with the soap to form another mineral, calcium stearate (think soap scum!). The surface becomes highly resistant to liquid water, scratch resistant and harder than cured lime yet still breathable to water vapor.

This January Ryan Chivers will be taking the lead in instructing a two day workshop at Prima Terra Plasters who are importing authentic Tadelakt from Morocco (http://www.facebook.com/events/485838111460505/). I’ll be there as an assistant and hope to see some of you as well!