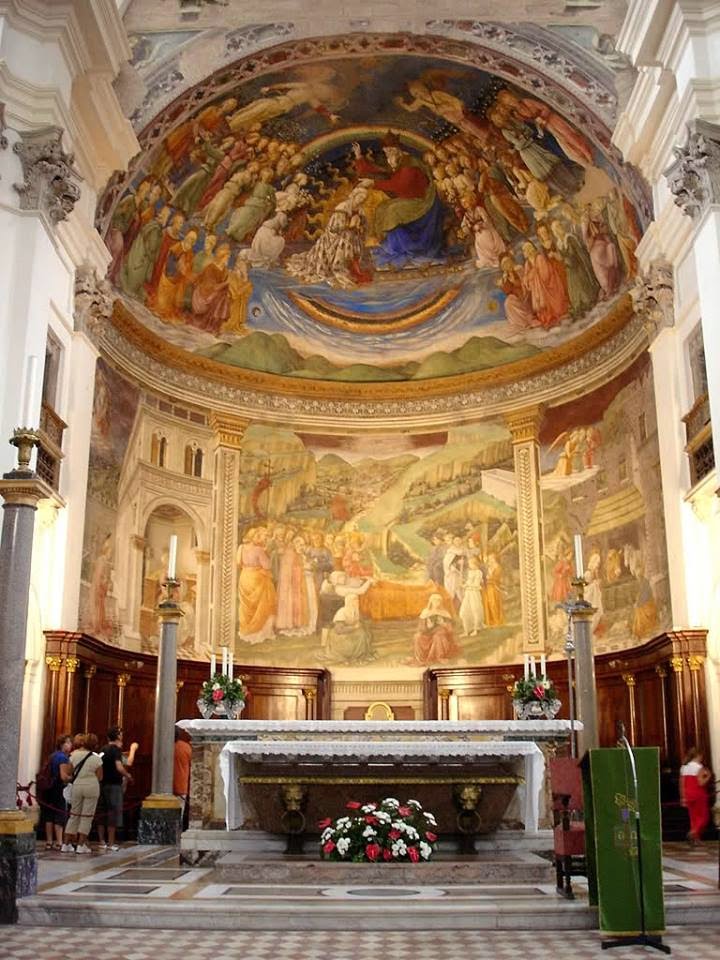 The ‘apse’ is the terminating space beyond the nave at the east end of the basilica. The word derives from Ancient Greek ‘hapsis’ (ἁψίς) meaning arch or vault. It does in fact take the form of a polygonal or a semicircular space covered with a vault or half dome respectively.

The half domes of medieval apses often contained beautiful mosaics, gilding and frescoes. We just recently concluded our annual ‘Spoleto’ festival here in Charleston so I thought it might be nice to show off the beautiful apse from our sister city’s duomo in Spoleto, Umbria. 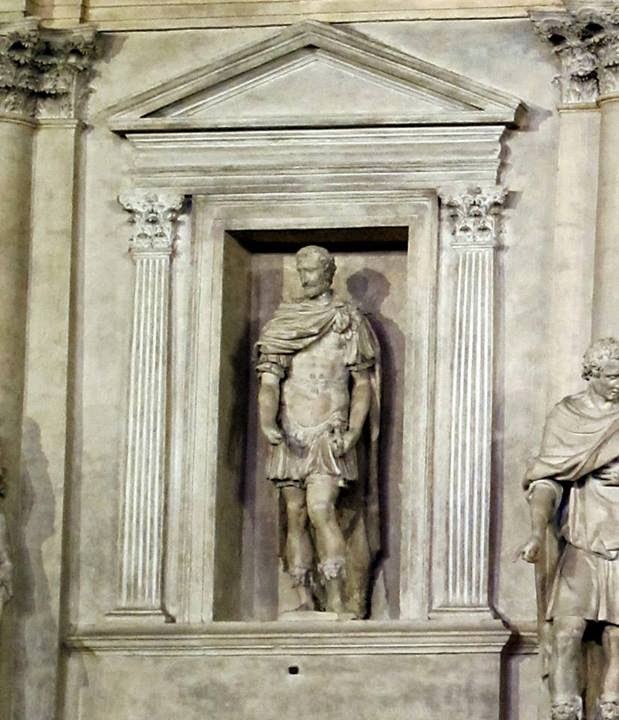 ‘Aedicule’ literally means ‘little house’ in Latin. It does in fact have the appearance of a miniature temple front, having a small pediment surmounting two pilasters resting on a sill or pedestal.

Often this design is used to give prominence to door entries or as a surround to enrich window openings. Also, it may have a niche that is filled with statuary as depicted here at Palladio’s Teatro Olimpico.

The clerestory is a raised level above the nave, supported by the arcade pierced with windows to bring light and occasionally ventilation into the body of the building.

In some cathedrals there is an additional mezzanine level of arcaded galleries fixed above the principal arcade and under the clerestory called a ‘triforium’, literally meaning ‘three gates’ but having a meaning of ‘thoroughfare’ or ‘passageway’.

I find the elevation at Lichfield Cathedral particularly well designed. There are cinquefoils in the spandrels of the arcade, quatrefoils and trefoils in the traceries of the triforium openings and clerestory windows respectively. 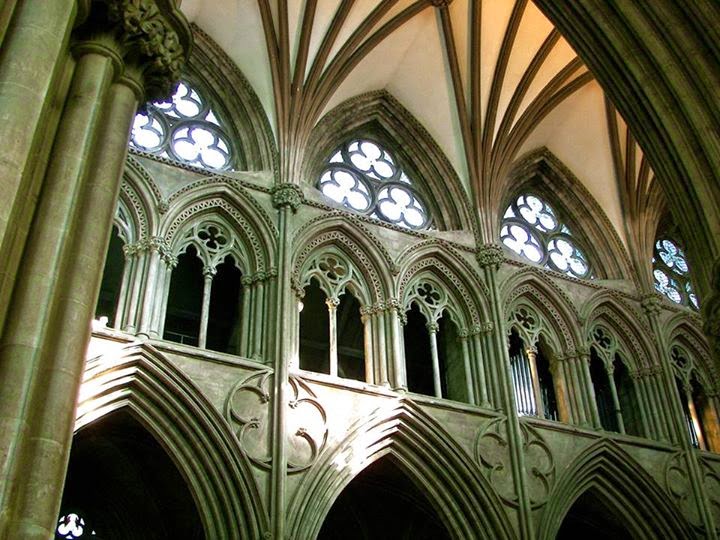 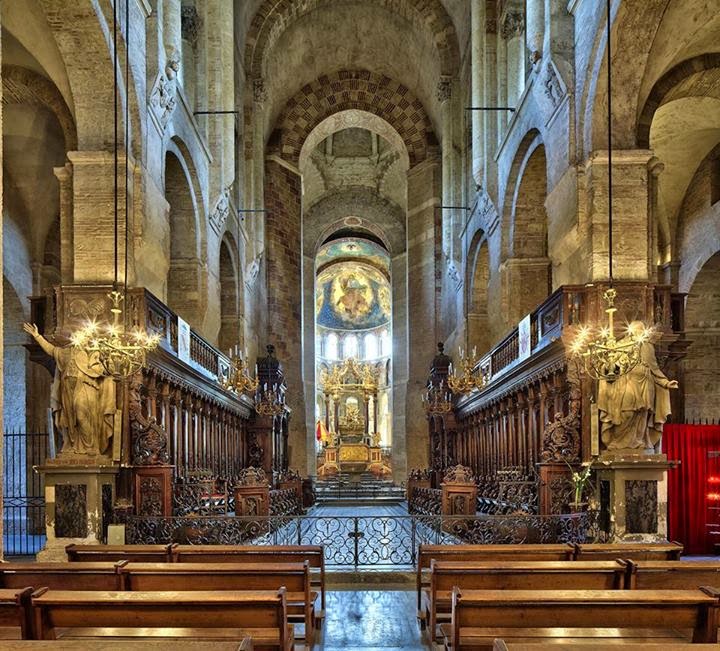 ‘Transept’ means ‘across the fence’ in Latin. Architecturally it is the section that crosses the nave separating it from the chancel in a cruciform cathedral. Sometimes the division between clergy and laity is literally expressed with a fence as at the Basilica Saint Sernin in Toulouse.

The shared space of the transept and nave is called the crossing and is often surmounted by a dome or spire.

Also derived from the Latin ‘cancellus’ meaning ‘lattice’ (again referring to the separating fence) the ‘chancel’ is the area beyond the transept that typically holds the choir, presbytery, altar and terminates in the apse. 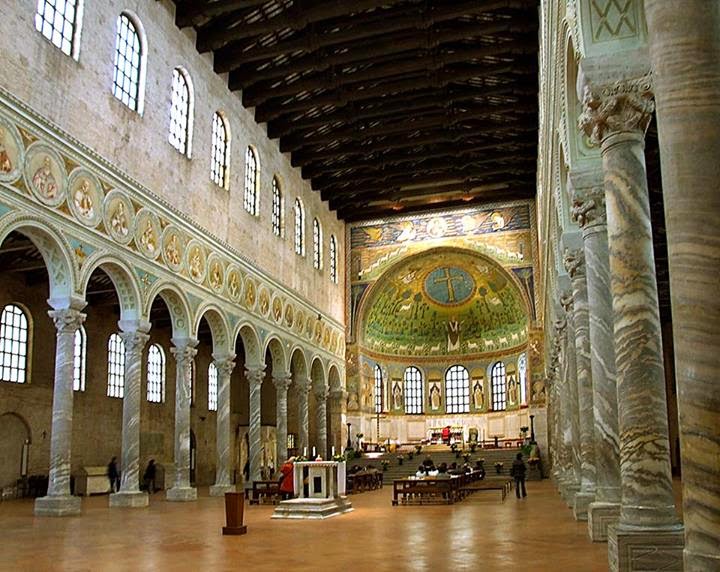 The Latin ‘Basilica’ originally derived from the Greek (βασιλική) meaning ‘kingly’ or ‘royal’. The Roman Basilica was a public meeting place where business matters could be conducted and sometimes settled by a sitting magistrate, representing the power of the Roman state.

By the 4th century basilicas were being constructed for the church. Over the next few posts we’ll take a look at architectural features typical of basilica architecture.

The central body of the basilica, having the highest elevation located just West of the apse. In a church it is usually partially filled with seating for the congregation.

The word ‘nave’ derives from the Latin ‘navis’ meaning ‘ship’ as it was felt the vaulting above somewhat resembled the keel of a ship. I particularly like the labyrinth in the nave of Chartres cathedral. It may not add much architecturally; nevertheless everyone, especially children are drawn to the maze, very interactive!

‘Aisle’ derives from the Latin ‘ala’ meaning ‘wing’. A basilica will often have one or usually two halls running parallel to the nave, the central body of the building. The aisle ceilings are typically lower than the nave.

A series of large piers form an arcade to separate the aisles from the nave. 16th century engraver, Albrecht Dürer, made some keen observations of the designs of early Romanesque compound piers as well as their evolution manifest in Gothic clustered columns.

Wells Cathedral provides a beautiful example of the unification of the compound piers with the arches and the ribs descending from the vaults above by incorporating aligned colonettes. Although the thrust is obviously downward, the feeling conveyed is vertical and upward as if the arches and ribs ‘spring’ from the capitals of the colonettes. 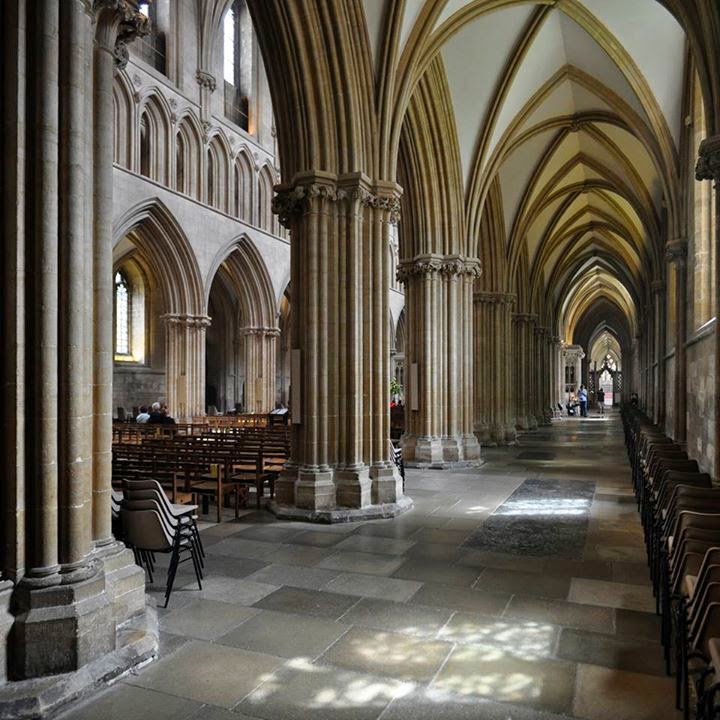