Some might recognize this Latin word as the medical term for eardrum. In the original Greek usage ‘tumpanon’ (τύμπανον) had the more general meaning of something struck, particularly the skin of a drum.

As the open area inside a pediment resembles a stretched surface of a drum the name ‘tympanum’ was given to this area. The tympanum provides an open canvas crowning the entry and is a great place for sculptural expression that relates to the purpose of a building such as our Supreme Court. 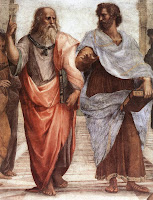 The program of study typically associated with this degree in contemporary education changed considerably in the 20th century. Unfortunately, in many institutions it has devolved into a free (undisciplined) journey of self-directed, exploratory study that eschews linguistics and math.

The classical liberal arts program of study was quite the opposite. The ‘liberal’ arts were considered the minimal requisite skills for a ‘free’ person or citizen to be a productive member of society and carry out his civic duties. The church organized the study in medieval times into two areas of study:

The Trivium having a focus on language and thought prepared one for the more advanced study of the Quadrivium, devotes to mathematical concepts. With this foundational education one was considered prepared for further specialized study in music, architecture, art etc.

When an arch or barrel vault intersects a dome there remains curved, triangular surfaces that transfer the weight of a dome unto piers below.

The term ‘pendentive’ derives from the Latin ‘pendere’ meaning ‘to hang’ and from which we have words with an associated meaning like ‘pending’ or ‘pendant’. Pendentives are characterized by a delicate, graceful form that visually appears to be hanging from the dome above.

The main body of the column has its roots in Old German ‘schaft’ which just meant a pole. However, I can’t just stop there. There is so much going on in these column shafts that we need two bonus rounds!

Again reed is just what it sounds like, a pretty direct metaphor for the vertical fillets (flat narrow ridges) that run between the flutes.

The flutes are the vertical grooves running between the reeds and yes the name is thought to come from the same origin as the musical instrument and the champagne glass. Thank the French!
The cylindrical ‘cables’ are sometimes used to fill the flutes about a third the way up to protect the delicate reeds from damage.

We will revisit this theme tomorrow to discuss some features on a different column shaft design.

Whereas the previously discussed ‘style’ is of Greek origin, ‘column’ comes from the Latin ‘columna’ having a similar meaning of ‘pillar’. The fluting of these columns from the Pantheon are a little different from the ones we discussed yesterday.

When two curved surfaces intersect to form a sharp edge the ridge formed is described as an ‘arris’. This term has its origin in the Latin ‘arista’ meaning ‘fishbone’.

‘Canalis’ , also Latin, originates from the ancient Greek ‘kanna’ (κάννα) meaning ‘reed’ or ‘cane’. It is the same root for words such as ‘channel’ and ‘canal’. The vertical grooves of the Greek Doric are distinguished by an elliptical radius.