French Stuc Pierre is a rendered or cast technique for imitation of Ashlar stone derived from a mix of gypsum plaster, hydrated lime (optional) and pulverized aggregate of the original stone to be imitated.

Although there exist examples of the imitation of stone with stucco among several ancient civilizations, it would be the Greeks and Romans who would perfect the art. The Greeks developed stucco techniques to directly emulate their monumental stone architecture. By contrast, Romans would display a more cavalier interpretation in defiance of Greek norms. Romans manifested a preference for its use in interior ornament and would take advantage of the freedom of the physical constraints stucco afforded by creating purely decorative realizations not possible in actual stone.

In medieval Europe the art of Stuc Pierre was to diminish, if not entirely disappear, transcended by the imitation of stone with distemper and limewash paint techniques. During the Italian Renaissance a resurgence began of the imitation of stone with lime stucco, a notable example being the 16th century Palazzo del Te outside Mantua where cornices, columns, pediments and a variety of ornament were developed to perfection in homage of the prestigious Roman travertine palaces of antiquity.


France would soon follow in the 17th and 18th centuries. Stuc Pierre based on gypsum plaster would predominate in 19th century private and public interiors adorning common areas such as entries, halls and stairwells. Not only did it create the illusion of classical stone monumental architecture but provided a comparable durability that has allowed many original installations to be enjoyed until the present time.

Due to widespread availability of gypsum throughout France, Stuc Pierre was in common use in regions diverse as the Normandy coast, Provence, Burgundy, the Pyrénées and Côte d'Azur. Particularly in Paris and the Île-de-France it is not uncommon to see extant examples of façades rendered entirely in Stuc Pierre or in combination with Stuc Brique, a similar technique where pulverized stone aggregates are replaced with brick powder. Stuc Pierre was traditionally rendered over a brick or masonry support. With the advent of iron and steel construction at the beginning of the 20th century, Stuc Pierre would increasingly be used over lath to preserve the appearance of a classical architectural façade.

The first step is the precise selection of the mix. For restoration works a counter type of the original limestone or mortar is engineered. New construction allows for a great artistic liberty. Unlike lime or cement, gypsum is a self binding material. Aggregates such as crushed stone, brick or sand are not necessary for performance of the coating but are added for decorative effect or to lower the total embodied energy. Similarly materials as diverse as wood chips, glass beads, sea shells or linen fibers can be added for artistic expression. 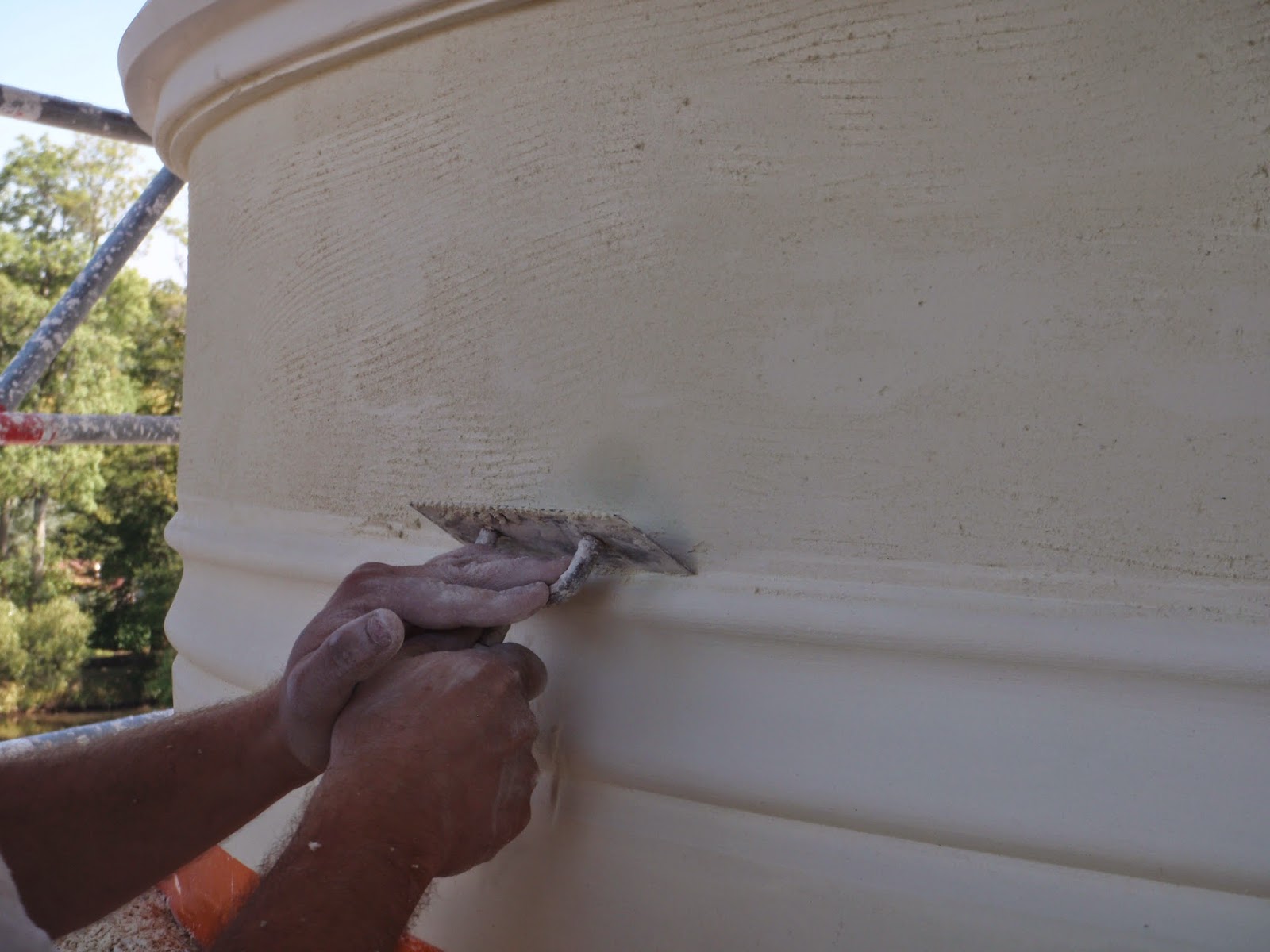 As with any rendered coating, the cleanliness and stability of the support are very important. When used in exterior several principles associated with classical architectural design are to be respected. Eaves, entablatures and stringcourses are important features in shedding water from the façade and preventing localized streaming. Horizontal and backsplash surfaces commonly occurring at gables, window and door openings should be properly flashed. A water table such as a dense, impermeable stone at the foundation prevents water rise due to capillary action. Adherence to a few, simple, well documented precautions results in a beautiful work that endures generations. 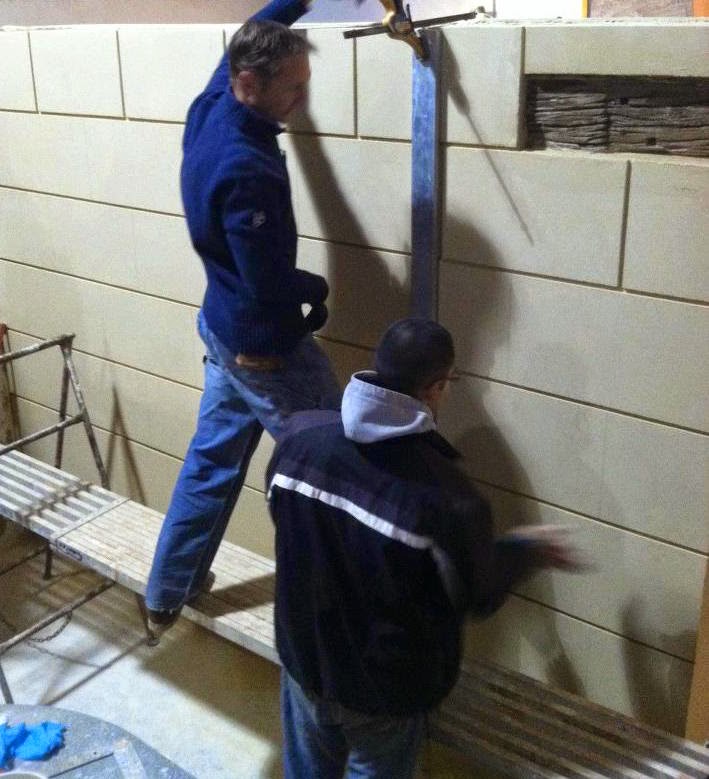 Mixing can be done by hand, drill or machine. Application in exterior can be made in a single or successive coats for a total minimum thickness of 1 ¼”. In interior reduced thicknesses of ½” to ¾” are possible over masonry and lath supports or over drywall substrates as a veneer. In all cases traditional stucco and plaster tools can be used including hawk and trowel, floats, darbies, corner tools etc. Various mix designs are available for render, veneer, run in place, mouldings and ornament.

The finishing of Stuc Pierre is where the skilled artisan is relied upon to unlock the great artistic potential of the material. A French steel razor or Berthelet is traditionally used to shave and level the surface, exposing the beautiful aggregates contained therein. Further treatments such as washing, brushing, burnishing or sanding can be successively used to achieve desired effects. For the cutting of joints a traditional railroad tool or Chemin de Fer is used. Joints can be left open in an Ashlar pattern or refilled with uncolored material to give a mortar effect.

Stuc Pierre is increasingly being valued in the sustainability market. In the EU, Stuc Pierre is commonly used in straw bale and hemp lime construction. Gypsum plaster has a relatively low energy of manufacture, produced by heating raw gypsum to about 300°F. Additions of clay binders, hemp fibres and reclaimed or recycled aggregates can reduce the embodied energy even further. Traditionally a small percentage of hydrated lime is contained in the mix contributing an alkalinity and natural mould resistance. All of the materials utilized in Stuc Pierre are mineral or renewable, non-toxic and free of VOC’s. Furthermore the porosity of the coating ensures a breathable assembly that takes full advantage of latent heat transfer and reduces thermal bridging.

I would like to thank Joël Puisais, Les Compagnons du Devoir and my colleague Marc Potin at Plâtres Vieujot for the historical references for this posting. Plâtres Vieujot was founded in 1880 and remains the sole privately held gypsum plaster manufacturer in France. More information can be found on our website: http://www.platre.com/platre/