The Proof of the Truthful 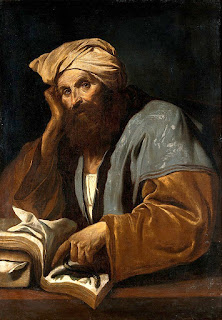 The contributions from medieval Islamic philosophers to the development of Western philosophy are undeniably numerous and profound. Here I'd like to pick out one argument from one philosopher as a noteworthy example: the Proof of the Truthful (برهان الصديقين) by Avicenna (ابن سینا‎). The proof purports to be a rational demonstration for why there must be a "necessary existent", something that must exist, a first cause for all contingent being. The "Truthful" refers to philosophers such as Avicenna himself. In contrast to the Koran that invites the masses to belief through a persuasive rhetoric or even the mullahs who approach the same subject through debate in a dialectic manner, Avicenna is indicating that the philosopher's method will be that of rigorous logical demonstration.

The point of departure for Avicenna's entire line of reasoning is nevertheless grounded in common human intuitions. We look around us with the palpable sense that everything we see is coming in and out of existence. The universe thus seems to cry out to the human mind for a reason for its own being. More than a millennium earlier the Greek philosopher Parmenides had coined the dictum, "nothing comes from nothing" in pursuit of his own metaphysical explanations. And nearly a millennium after Avicenna,  European philosophers such as Leibniz and Schopenhauer would revisit similar questions by means of what they described as the principles of sufficient reason. We ourselves are witness to a multitude of effects around us and can't help but wonder what is the cause of it all. Avicenna provides one of the most cogent arguments ever formulated for necessary being.

An initial presupposition of Avicenna is that there are three modes of being. There are things that are impossible, their vary essence precludes their being. An example might be a square circle which is contradictory by definition. Next there is the most familiar to us, contingent being. You and I could exist but we don't have to exist and in fact we eventually will cease to exist. Likewise, we're not even the cause of our present existence. Finally, he speaks of necessary existence. Something whose essence guarantees existence, is fundamental to its very nature. As we don't tend to question impossibility or contingency so his proof is focused on establishing a logical ground for necessary being.

Yet one may ask, why is the necessary even necessary? Might not contingent being suffice to explain everything? After all our notions of being seem primarily grounded in cause and effect. Yes, our being has a cause which we attribute to our parents, who had parents, perhaps ad infinitum. Similarly, existence might be occurring in cycles as a repeated loop so that the effect leads back to the cause; everything that has happened before will yet take place over and over, forever and ever. Certainly, ancient Eastern and Western religious beliefs and philosophical theories of an eternal universe posit such explanations. Avicenna rightly points out that this would lead to an infinite regress of contingent causes. Nevertheless, that is no objection in and of itself to its possibility. Avicenna must probe further. 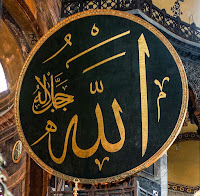 Many of the qualities attributed to God by Avicenna are again encountered in what are known as the "beautiful names" a list of 99 names or superlative attributes traditionally ascribed to God. Although the idea of the names comes directly from the Koran, the list is not strictly definitive; there are different iterations which contain names found both in and outside the Koran. The point of them is generally understood to serve as a means of directing praise to God by reflecting on his qualities. As such the names can found inscribed on Islamic rosary beads or "tisbah" (تَسْبِيح) literally meaning "glorify", the recantation being utilised for meditation and daily reflection.

Topping the list are the names of "most gracious" and "most merciful" found in the basmala (بِسْمِ ٱللَّٰهِ ٱلرَّحْمَٰنِ ٱلرَّحِيمِ) that introduces all but one of the surahs of the Koran. However, also included are  transcendental aspects of necessary existence as expressed in Classical antiquity. God is "the True" (ٱلْحَقُّ) and "the Good" (ٱلْبَرُّ). Moreover, I find it quite interesting that it is the quality of "the Beautiful" (الْحُسْنَىٰ ) that characterises, permeates, and infuses the entire list. To be clear, the translation of the Arabic "al-Hassan" is no mere reference to superficial prettiness, rather conveys the notion of excellence and harmony that similarly typify Classical conceptions of the beautiful.

There exists some disagreement and controversy as to whether or not the world of Islam is part of Western civilisation. Admitting that such classifications are based on subjective judgements, I'm going to state that my own position is a definitive yes. The cultural exchange between Islamic intellectual, religious, and architectural traditions with their Jewish, Christian, and Classical counterparts is profound and in my view inextricable. This is especially the case for the Islamic societies of North Africa, the Levant, Baghdad and Persia that have had the deepest and most enduring cultural exchange with what is typically considered Western civilisation.