3. That than which a greater cannot be thought exists in reality.
Stated in this manner I understand what the argument contends. However, upon a cursory reading it doesn't sound the least bit convincing. Because I can think of the greatest being...he must really exist. What kind of argument is that? It comes across as psychological scaffolding without a proper foundation attempting to wish God into existence. Well, as it turns it is an argument that implies its reader shares a view of reality informed by a number of unstated presuppositions that you and I likely didn't grow up with. Fortunately, I think it's not too much of a stretch to temporarily adopt that frame of reference.
A Teleological vs Mechanical Model
I would expect that most of us are beneficiaries of a secular education (if not exclusively) that presents a roughly mechanical model of reality. Newtonian science describes a cosmos of bits and bobs, applications of forces that unfurls deterministically like some great big clockwork. To be fair I think science has somewhat moved on from that conception of reality to something more organic and relational; nevertheless, popular culture seems to lag behind. Yet at the time Newton and his contemporaries' ideas were revolutionary. So what was the previous model?
The most common view held amongst the Ancient Greeks was what is called a teleological model of reality, derived from the word 'telos', meaning 'end' or 'purpose'. The material world was conceived as more than just cause and effect, blind forces acting upon matter. Form and pattern were observed and accounted for as having a final cause that they were working towards, one that gave meaning to existence and provided explanation for why things proceeded in the manner that they appear to do so. The observable cosmos was one of order and harmony indicating that there was an intelligence underlying it all. It's not going out on a limb to say this is a rational view, one that accords with much of our experience. For example, we can easily observe that vegetation goes through its cycles of growth, maturity, and reproduction in a manner that satiates its appetites. Likewise animals do the same and additionally manifest a will of their own satisfying desires and avoiding pain. Reflecting on our own lives, we share these characteristics and have our own proximate goals that we seek to pursue. We seem to be willful, purposeful, goal oriented creatures.
The teleological model does not discount mechanical aspects of existence, rather subsumes them as instrumental means to achieve an ultimate end. This is not unlike how humans design various mechanisms with purpose in mind, often coming up with different designs that achieve the same outcome. Even for our own creative activity the means are not as important as the purpose or goal we're hoping to achieve. So what was the telos, the final cause, the ultimate end for the Greeks?
The Essence of God 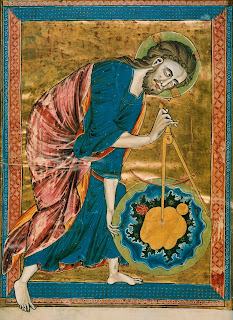 In a word, God. Plato in particular belaboured to put this into philosophical language. The cosmos was accessible to human reason as it is characterised by order. The inner unity we see in things, that makes them identifiable as things at all, was attributed to a transcendental nature that he called the Forms. They were 'transcendental' because they did not depend on the particular existence of any one thing but are like an intelligence that lies underneath, give rise to the particular form any one thing may take and purpose they may carry out. However, he further observed that there appears to be an overarching order that unifies all the varied particulars of existence into a coherent cosmos that appears to be progressing in a certain orientation. This unity or Form of all Forms he at times calls God, at other times the Good.
This Greek, specifically Platonic view, shares many similarities with the Judaeo-Christian conception of God. God is a unity, the One. God is the Good. God is the intelligence underlying the world and the ultimate end. However, there are differences between the Greek and Christian conception that prove significant. The most noteworthy departure being that, for the Greeks, matter is eternal and independent of God. In its original state it is chaos, uncreated, formless and waste. God in some way or fashion, perhaps through intermediary beings, is ultimately what brings order out of this primordial chaos. In summary, for Plato what God imparts to matter is form and reunion with God, the actualisation of form is the highest, ultimate end.
In the Christian view this is an insufficient conception of God. God does not just impart form to matter, instead he imparts being itself. The essence of God is not just form rather existence itself. Therefore, there is no matter apart from God. The Christian conception of prima materia differs from the Greek conception of chaos. Primordial matter has no independent existence, is nothing more than potential for being...in the mind of God. God brings matter into being by imparting into it His essence, existence itself. In the Christian scheme God is thus the perfection of being, the complete actualisation of all potential. Such being implies certain characteristics: omnipotence (all powerful), omniscience (all knowing), infinite (without limitation), and impassible (cannot be changed or acted upon).
At this point I think we've established enough of a background to lend some support to the underlying logic of Anslem's argument. If being is the ultimate good, than being in reality must be greater than being in conception in the same manner that actuality is greater than potential. So to have the conception of the 'greatest', ergo most actualised, being in the mind would be meaningless if he didn't exist in actuality. If being is your criteria he wouldn't be the greatest is he didn't actually exist, a logical contradiction. To avoid absurdity, the moment you can conceive of the greatest being he necessarily must exist to be the greatest.
Convinced yet? Me neither. However, I have to confess it no longer sounds completely ridiculous. Once you understand that Saint Anselm was not making out his claim to be an empirically demonstrable proof for God, instead a reasonable, logically worked out proof based on specific presuppositions pertaining to a certain world view, it's not so difficult to follow. Understanding that for medieval Christian philosophers being itself was identified as good, and perfect being the Good and ultimate end sheds considerable light on their way of thinking and goes a long way in helping us to appreciate their contributions to philosophy.
Contributed by Patrick Webb
Posted by Patrick Webb at 7:25 AM