On Pattern Design in Architecture


As a traditional craftsman, particularly in my experience as an ornamental plasterer, I often find my work lies at the intersection of two distinct approaches to design: pattern and architectural. I've observed that in contemporary architecture there is a great deal of confusion as to how the two different thought processes can be brought to bear on an unified architectural scheme. Today they are very often simply conflated, an effect quite detrimental to architecture as I will seek to illustrate.

With three centuries of advances in industrial printing and weaving processes and the late 20th century move from analog to digital graphic technology, pattern design has asserted a dominance unmatched at any previous time in human history. Nevertheless, the fundamental basis for pattern design has remained unchanged: the articulation of space. By space I mean to imply that which is free, unbounded, infinite, spiritual, heavenly...Space.

The point: in concept, location without dimension. By extension from the source, the origin we have emanation, expansion. The germinating seed, an all encompassing unity. In ornamental design, this has been traditionally represented in imitation of nature: the flower, the star, the all seeing eye.

In much of modern architecture we can see this tendency to apply pattern design to the entirety of the building itself, the building as a giant ornament or manifestation of pattern. The geodesic dome pictured above provides an example of a deliberate intention to create a sense of something from space. Both the shape and choice of highly refined metallic cladding convey a perfect yet alien quality. In more pedestrian contexts spheres are expensive to construct, difficult to live or work in so more often we see built the hyper-rectilinear equivalent, the cube or orthotope. A spatially isolated, unbounded, self-contained unity situated in a 3D Cartesian matrix.
The Ray

The line introduces concepts of dimension, direction, polarity, duality, separation. Left/right, above/below, inside and out. With the line comes the potentiality of repetition, whereas carried to an extreme results in monotony. Much commercial architecture today takes on this graphically linear aspect not unlike ruled paper, horizontal lines suspended in space, unbounded and framing nothing, the eye seeking in vain for resolution. 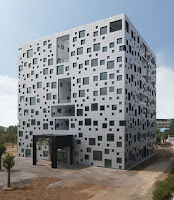 With surface comes the ability to manifest texture, interlace and interlock becomes most evident and  a second dimension allows the formation of webs and nets. The plane is the bread and butter of graphic design: wallcoverings, rugs, textiles, tiles, wrapping papers to name a few. For decades we were subjected to the most boring, unrelenting glass boxes of government and commerce. We didn't know how good we had it. Today's buildings are typically "jazzed up", pushing windows in and out, switching up sizes and orientations, or spacing them randomly. The façade is viewed as nothing more than a canvas for various decontextualized textures constrained within a rectilinear grid wallpapered onto the same old boxes.

For pattern design, the third dimension represents the pinnacle of spatial mastery. A clear comprehension of mass and void, light and shadow as well as the ability to fill three dimensions volumetrically with regular pattern is undeniably special. It's understandable to imagine applications in the field of architecture. Modern architecture has taken this in two basic directions. There is the undefined mass that actually rejects overall pattern, lacks any definable boundaries and features only a minuscule, localized surface pattern that will morph to any contour. Also common is the mash up of all the previously mentioned misapplications of pattern design to architecture. Extruded orthotopes are piled up seemingly at random, a mercilessly incessant tangle of lines and grids.

The tectonic or constructive aspect of architectural design has been for millennia and ought to remain primarily about gravity. Secondarily, limits are set while possibilities encouraged by climate (temperature), weather (humidity and precipitation) and terroir (local soil and materials). Granted we're crisscrossing the globe with materials nowadays so perhaps we can temporarily ignore the use of local materials (to our increasing peril). Yet gravity is unrelenting, she imposes and restricts form and structure so that architecture must be grounded in the material and quite literally in the Earth. Attempts to circumvent this are only an affected style, one that is incongruent with reality and thus disturbing. Pattern design ought always be subordinate, not in extreme and defiant aesthetic conflict with the gravitational, earthbound nature of architectural design.

Points, circles and spheres inevitably become concentrated areas of focus. They draw us to the center. It's only fair that the viewer should be rewarded upon arrival. The rose windows of Romanesque and Gothic cathedrals provide stunning examples of placing the finest handwork, most delicate arrangements of carving and color right where we're most apt to look. Notwithstanding, they're not overly insistent. The gaze can easily withdraw and the window will comfortably fit into the overall architectural composition.

The Lincoln Memorial is a Classic example of the mastery of linear pattern applied to architecture. The repetition of vertical lines of the columns gives a clear indication of stability and support. The incised flutes only serve to bolster the feeling. Between stylobate and the capitals the lines of the columns are clearly bounded. Richly ornamented, the horzontal bands of the entablature and attic hold visual interest; however, they are also contained within a series of bounded frames that permit the eyes to rest and once again establish a unified composition. 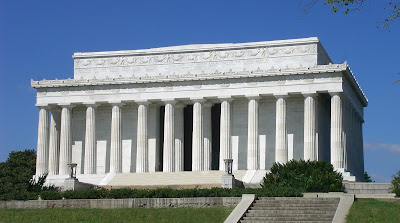 Drawing on long established vernacular traditions, Arts & Crafts homes such as the Red House designed by Philip Webb for William Morris avoid rationalizing the exterior and naturally arrive at a façade filled with variety and visual interest. The surface is not reliant on any jarring tricks to stimulate the senses. Rather the restrained aesthetic is filled with similar details at a range of scales. Even the materials selected are textured and lively, notably the bricks laid in common bond with English corners. 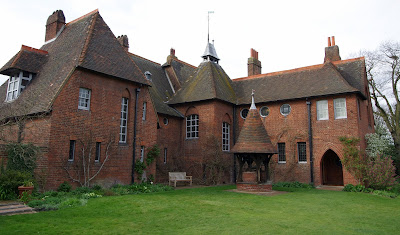 I think the absolute mastery of tessellation applied to architecture without contest belongs to Islamic architecture. The muqarnas of palaces and mosques are simply breathtaking. Islamic architecture in general is rich in color and pattern. The underlying philosophy purposefully utilizes point, line, plane and 3D tessellations to express the infinitude of the divine. It is important to note that what makes all of this exuberance coherent and comprehensible is Islamic architecture's expert use of framing and boundaries. Even this apparent superabundance of pattern remains subordinate to the architectural design.

Despite having a great love for pattern design and using it extensively in my own work, I believe architectural design taught essentially as a rationalized discipline of the articulation of space has been very damaging. We don't live in space, an abstract concept of nothingness. Rather, we inhabit a rich material reality. Even the air we breathe engages the senses with texture and scent, is a medium for light, warmth and sound. Our collective architectural heritage is clear evidence that pattern and architectural design are not necessarily antagonistic. Quite to the contrary, we need architectural design to reassert its position at the forefront of design in our built environment. An architecture rooted in nature and the earth that pattern loving craftsmen like myself can support with our hands and our hearts.