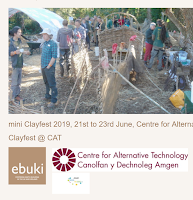 As a traditional plasterer based in the United States, I've been tangentially involved in natural building for many years, in both projects as well as gatherings. Of interest to traditional plasterers straw bale, light earth, adobe, etc. all involve coatings which typically include lime, clay or some combination thereof. However, natural building, contemporary traditional building and historic preservation (or what is called in the UK heritage and conservation work) remain parallel developing but largely separate sectors in the US. I've made a point in my writing and speaking to nudge these movements towards what I see as a natural convergence. To that end I was quite interested to see the state of affairs in the UK and to some extent the EU by attending Clayfest, an event sponsored by Ebuki and hosted by CAT, the Centre for Alternative Technology near Machynlleth, Wales. What I experienced was a bit unexpected.

The aforementioned convergence between heritage, traditional new construction and natural building seems already well integrated in the UK and a number of the lectures were on this very topic. We heard form an heritage officer involved in organising training in traditional craft skills, a couple of traditional plasterers who work in and provide training to both the heritage and natural building communities as well as an academic from the University of York who's lecture was explicitly entitled, "Rethinking Sustainability as Heritage". Drawing from the vast inventory of traditional earthen buildings, stone masonry and timber framing in the UK and EU, I was left with the impression that the technical as well as embodied craft understanding of these materials and systems combined with the cross discipline communication puts these folks well ahead of where we are presently in the US.

Day one was a lecture day. We sat in a lecture hall and listened to lectures...all day. There was supposed to be time for Q&A at the very end of each session but of course, as these things are wont to do, the speakers went overtime and hardly any audience participation occurred. I've no doubt that there were hundreds of years of collective wisdom within that room but the format did nothing to release it. I was really looking forward to the practical workshops of day two. However, the way these were structured also inhibited too much participation and there ended up being a lot more standing around than I'm used to seeing. These were nothing more I believe than structural impediments that could be easily addressed with some reorganisation. In that respect I think there have been some advances in the US with what is called the unconference or open schedule conference that allows attendees to think about what they might want to speak or hear about and participate in setting the agendas for smaller group discussions that reassemble later for strategy sessions.

You say you want a revolution
Well, you know
We all want to change the world - JL

The first thing I'll say is a bit intangible: I didn't feel welcome. That may not sound like much but it was jarring for me. I've always felt welcome in the natural building community. If I had a people, these would be them. Yet, something felt off from the moment I arrived. Where to begin...well, they're rolling out this train the trainers initiative and a common sentiment, practically an unofficial theme that I kept hearing over and over was along the lines of, "we have to train people to think like we do". I lack their certainty. I know I'm wrong (I strongly suspect they are too). I parade my ideas out there with the expectation and hope that I'll be told how wrong I am. Even if I'm right today, that answer will be wrong tomorrow; the world is dynamic, it's a living process. Oddly enough, none of the individuals seemed arrogant when talking with them one on one, yet this hubristic spirit hung over the entire proceedings.

You say you got a real solution
Well, you know
We'd all love to see the plan - JL

Getting a bit more specific, there were in my mind issues with some of the lectures themselves. The first of which was entitled, "What does an anti-capitalist building site look like?" I think one ought to be cautious about a negative title but fair enough, I personally hold the view that a capitalist economy is not going to be viable for much longer for humanity. I would've appreciated the speaker actually addressing the question and relating it back to earthen building. Instead we received an inundation of postmodernist philosophy, specifically a mash up of deconstructionism and feminism and poorly conveyed at that. A diatribe against an undefined patriarchy typified by white supremacy that painted two caricatures: the violent, aggressive, tyrannical masculine contrasted with the tender, generous and honest feminine. The solution? Again, the question was never addressed.

You tell me it's the institution
Well, you know
You better free you mind instead - JL

A second lecture, "Integrated technical training for women in northern Nicaragua", was delivered far more coherently and perhaps for that very reason, was more disturbing. Actually, the lecture had very little to do with technical training beyond its practical use as an instrument for feminist activism. I've no doubt that many women, have a hard life in Nicaragua and made even more so because they are women. Furthermore, I've no objection to support folks who are trying to develop their own capacities. It's the entire reason I teach, speak and write. However, it's one thing to support someone's personal development and another to indoctrinate and activate the young as avatars of your own ideology. It came across to me that the speaker was dripping in condescension of Nicaraguan culture. It's the same disastrous attitude the West has displayed internally and towards the rest of the world for almost a millennia, sending out our missionaries to convert and "civilise" the masses. That kind of "helping" has bred a maelstrom of resentment. Replacing the church with a secular ideology doesn't change the basic disposition.

In conclusion, I'll say this: the natural building movement grew into existence from the ashes of lost tradition, it came about organically. If we now attempt to graft to it postmodernism, feminism, socialism or any other rationally constructed ideology, it won't be racists, misogynists, industrialists or any "other" that will destroy the movement from without, but tragically it could very well be us that poison it from within. Please, let's not let it come to that.

Don't you know it's gonna be
All right - JL 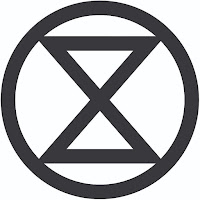 I noticed many folks at Clayfest had the pictured symbol on T-shirts or as badges. The extinction symbol, an hourglass within a globe, has been taken on by a newly formed social movement, Extinction Rebellion. I read their manifesto which actually came across as measured and reasonable. I'll be keeping an eye on how they interpret this manifesto and develop.