Hopes and Dreams for the Traditional Plastering Craft 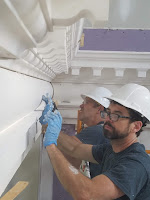 The close of a year is always a good time for a bit of reflection. Certainly 2018 held a good many things for me to be encouraged by, a number of traditional plaster projects that I feel blessed to have been a part of. At the outset of the year was the design, construction and on site assembly of a tessellated Islamic dome for a small, private chapel. Although Islamic design has been an interest and private study of mine for many years, this was the first significant project I had the privilege of realising with my good friend Rob Wozniak of Preservation Works. 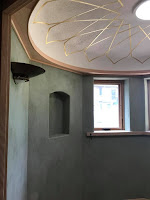 This was quickly followed by another collaboration between Rob and I in the spring, the manufacture and installation of large fibrous plaster coves resting above a British Palladian Ionic entablature visually supported by bespoke Ionic pilaster capitals for the Veritas School, a Classical Christian Academy in Richmond, VA. The architectural firm Glavé & Holmes invited us into the design development process and brought us in to speak with their staff more broadly on traditional plaster and heritage masonry means, methods and appropriate uses in contemporary architectural specification. 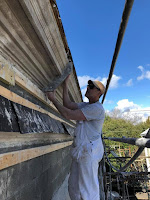 Currently I'm about half way through a new build, monolithic masonry "Charleston Single" in the historic district of Charleston, South Carolina designed by my good friends, Classically trained and oriented architects Bevan & Liberatos. Chris and Jenny specified the many finely articulated exterior mouldings they designed to be run in Natural Cement, very much in keeping with the 19th and early 20th century local tradition. Even while work is progressing, we've become a regular feature of the horse drawn carriage tours, a testament that 'you can in fact build them like you used to!'

The upcoming year, 2019 looks every bit as busy. One never knows (or should try forcefully to determine) what the future has in store; that being said, I've a general direction so here are a few potential projects, hopes and dreams I'm excited about. 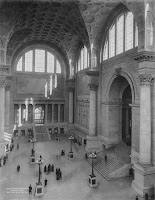 The destruction of the McKim Mead & White masterpiece in 1963 sparked the historic preservation movement in the US, resulting in Federal legislation protecting historic structures and districts as well as funding for university programmes in Historic Preservation. The claustrophobic station that replaced it and the universally detested Madison Square Garden complex are showing their age and plans are underway for a complete overhaul of the site. There is an organised movement underway gaining public support and momentum to rebuild Penn Station according to the original drawings with updates for current building codes and reasonable accommodation of technological advances. One of the strenuous objectives is that there is no one capable of doing that type of work anymore. My offer to the movement is to allow myself and a small team to build a full scale plaster mockup of i.e., the Corinthian entablature, capital and a section of the coffered vault as a public art display in Grand Central station where nearly a million daily commuters with their smartphones and social media presence can engage with the grandeur of the design and lay that argument to rest. The initial response has been favourable, fingers crossed on realising that dream!

Notre Dame has the only full-time programme in the world, at both the Undergraduate and Graduate level, concentrated on the teaching of Classical Architecture. For the past couple of years I've been invited to conduct hands on plaster workshops as part of a growing initiative to incorporate traditional craft into the curricula. Recently dedicated is an entirely new campus just for the school of architecture, to be occupied in 2019. The interior rooms are essentially unadorned boxes or perhaps a better way of thinking about it: blank canvases. I've pitched the idea of a faculty research project that would work with advanced students to complete the interior design of a given room as an exemplar of a Classical architectural tradition. The design can then be easily mocked up in plaster and together with the drawings be put on display as a possibility that could be made a reality, a fund-able opportunity. One could imagine over the course of 10 or 20 years, the halls and classrooms of Notre Dame serving as models of Greek, Roman, Renaissance and British Palladian design and craftsmanship. Students and faculty designing the very environment that they will inhabit, steward and pass on as a gift to subsequent generations. Similar conversations for smaller scale initiatives have been had with INTBAU and The Center for Traditional Craft in Savannah, GA. This might be more than a dream, perhaps an approach to Classical architectural and traditional craft education to be hopeful about!

Earlier in the year I wrote about the Guild and the recent gathering in Ireland. Personally, I've applied for membership and this year hope to join Philip Gaches and other Masters of the Guild on heritage projects so that I can continue to improve my own skills and pass on that knowledge to my colleagues back home. The next gathering in 2019 is to be held in Scotland. There has been a real interest in the Guild here in North America and I'm very hopeful that we can bring a contingent from the US and Canada over to discuss the possibility of greater connection and exchange with our highly experienced colleagues across the pond.

Speaking of continued learning and growth, I intend to buckle down with further study and drawing of architectural ornamentation at the Academy of Classical Design in the spring. This past summer we held our first week long short programme on ornamentation and determined that future programmes would benefit from more time, perhaps 4-6 weeks. So there is some work in expanding and modifying the curricula to that end.

The most effective way to share traditional craft is to roll one's sleeves up and get to work with one's colleagues. However, there is a supplemental place for sharing with even those inside but particularly outside the craft: writing and other forms of media. Currently, I've been gathering more research for further essays in my A Craftsman's Philosophy series. Next up are The Romantic Craftsman that, rather than discuss a style, takes up a traditional craftsman's general disposition towards the world. That should be quickly followed by The Ethical Craftsman which will break down into Aesthetics, the role of discrimination and judgement in how things ought to appeal to the senses as well as Morality, how ought we be disposed or act towards our fellowman in the process of making. Aside from the long running series in Walls & Ceilings and Traditional Building magazines, I have essays being contributed to the The Journal of the Building Lime Forum and Useful and Beautiful, the biannual magazine of the the William Morris Society in the United States.

Additionally, I've begun to record and publish audio readings of my essays in additions to lectures and discussions. I just need a few more followers before I'm allowed to change the name to 'A Craftsman's Philosophy' so I'd be much obliged if you consider following my YouTube channel!

Well, that's all I have for now. Looking forward to seeing, working and conversing with many of you in 2019!