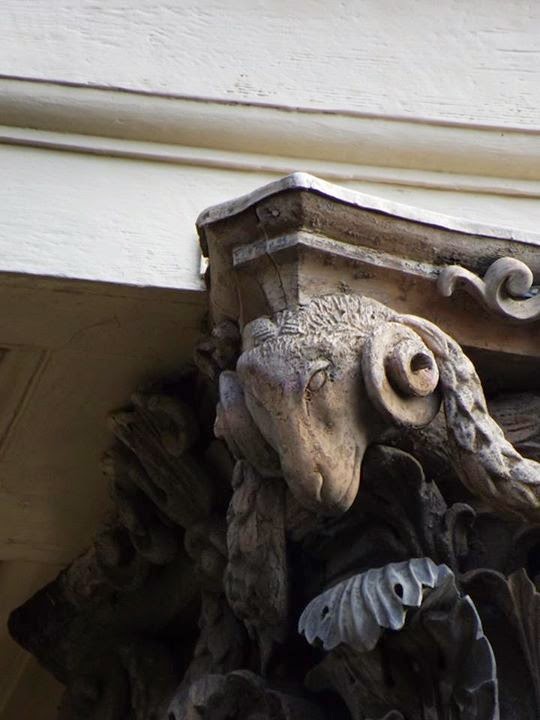 AEGICRANIUMA sculpted ornamental skull or more often head of a ram often utilized with the Corinthian and Composite orders. This exquisite example I chanced upon in downtown Charleston. 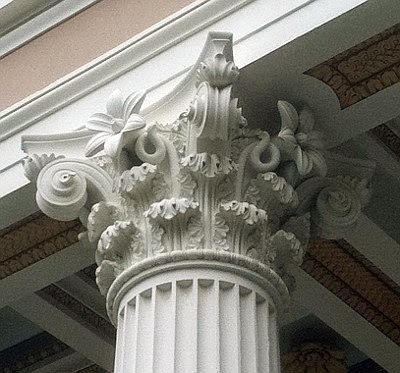 The most lavish, beautiful and the last of the 'Orders' developed by the Greeks in the 5th century B.C.E. It can typically be identified by its capital which often has a height greater than the diametre of the shaft and is highly enriched.

Thrusting up from the acanthus leaves and spiraling underneath the abacus are typically 16 or 8 as in this example “helices”, delicate volutes, much more diminutive then those of the Ionic order. 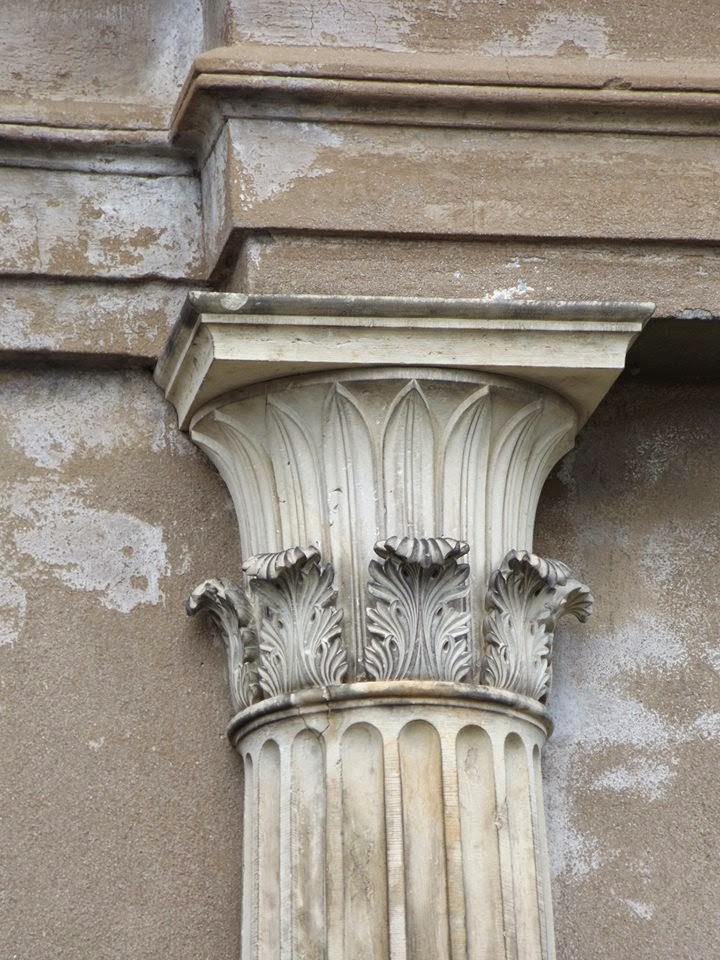 TOWER OF THE WINDS

A 2nd century Athenian clocktower had a unique, simplified treatment of the Corinthian capital where a single base row of acanthus leave sits underneath a row palmette leaves that reveal the curvature of the bell. This has become a very popular version of the Corinthian order in the United States. 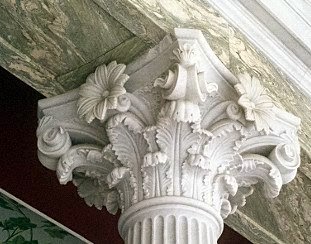 Your might recognize the similarity of 'Fleuron' to the French word for 'flower', 'fleur'. In fact, 'Fleuron' is the Old French augmentative form of flower. Often you'll find a fleuron crowning each of the four pairs of inner helices of the Corinthian capital such as this one at the Getty museum which has a really over-sized version.

If you are going to draw that much attention to yourself, you should be worth the spectacle. Fortunately, this one is quite beautiful. 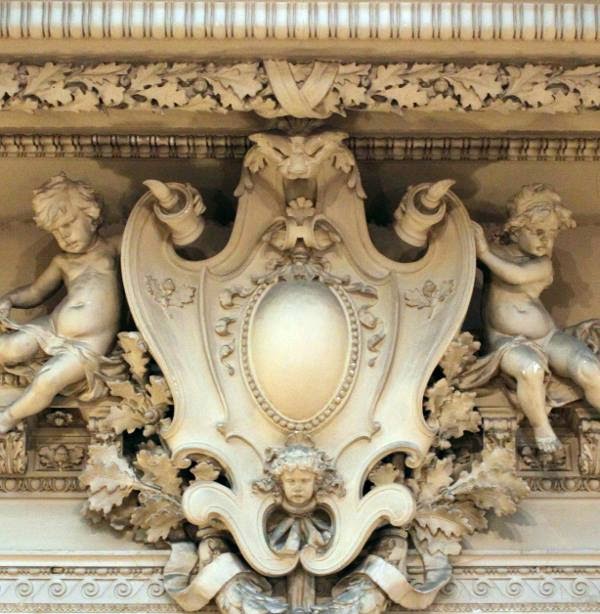 The cartouche/escutcheon is the crowning centrepiece of the main stairwell of the Vanderbilt estate in Newport. The stairwell itself is a focal point of the main room and its every detail symbolically conveyed the power of the family. Notice how the scroll of the cartouche resolves itself into a menacing lion's roar, powerful imagery!

However, I'd like to draw attention to the band of oak leaves running just above. This motif called a 'fasces', Latin for 'bundle' that has its origin in the Etruscan civilization and was adopted by the Romans. PER UNITATEM VIS or 'strength in unity' was represented by a bundle of rods held together by leather bindings. The implication was that though a single rod may be easily snapped a bundle was almost impossible to break. Here rods are replaced by the leaved branches of the Vanderbilt family symbol, the mighty oak, itself further transmitting the underlying message of power.

In Roman times a literal fasces had an axe head incorporated into the binding and was present as a symbol of the power of the Roman magistrate. The rods and leather symbolized his power to mete out corporal punishment whereas the axe represented his power of life and death. This symbolism was adopted by the 'Fascist' regime of Mussolini and likewise has been used extensively as emblems of the US government and military.

A semi-circular arched opening containing two smaller semi-circular openings (or in this case a window) separated by a small column or colonnette.

A circular form, either in the form of a plate, disc or an astragal type profile such as the foil opening above the center column of this example. 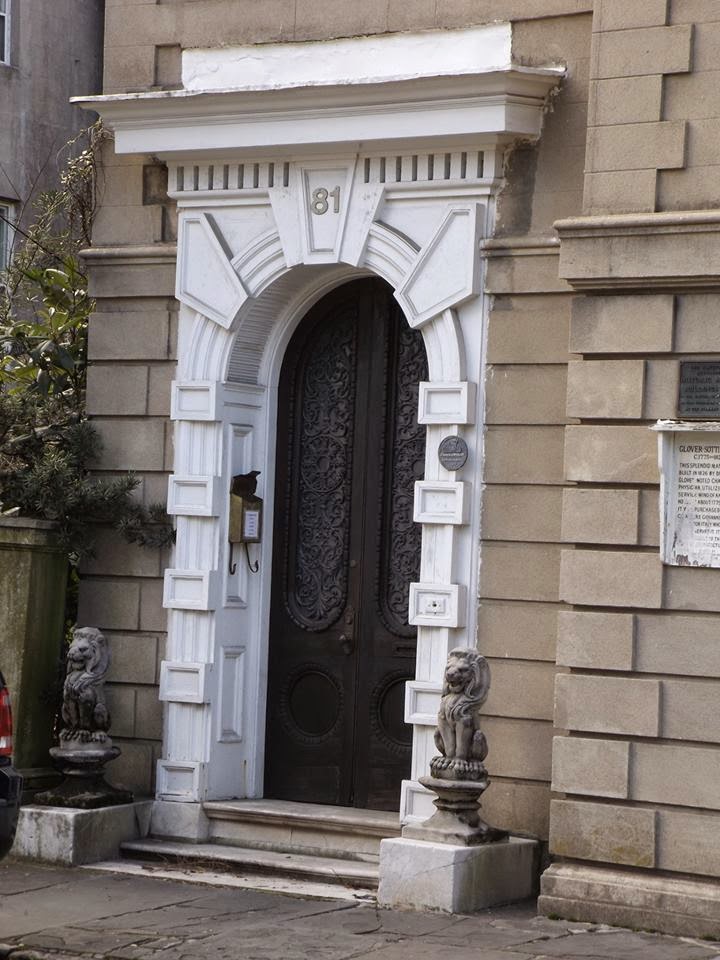 This is a particular form of the architrave or frame surrounding a door, rusticated with large blocks and surmounted by a keystone. Although this particular treatment has existed for millennia, it was popularized through distribution of a pattern book by 18th century English architect James Gibbs, hence the name.

The raised platform on which a classical building occasionally rests. The term comes from the Greek 'πόδι' or 'podia', meaning 'foot' (think podia-try). The Romans in particular favoured podiums, which can often serve as a basement storey. 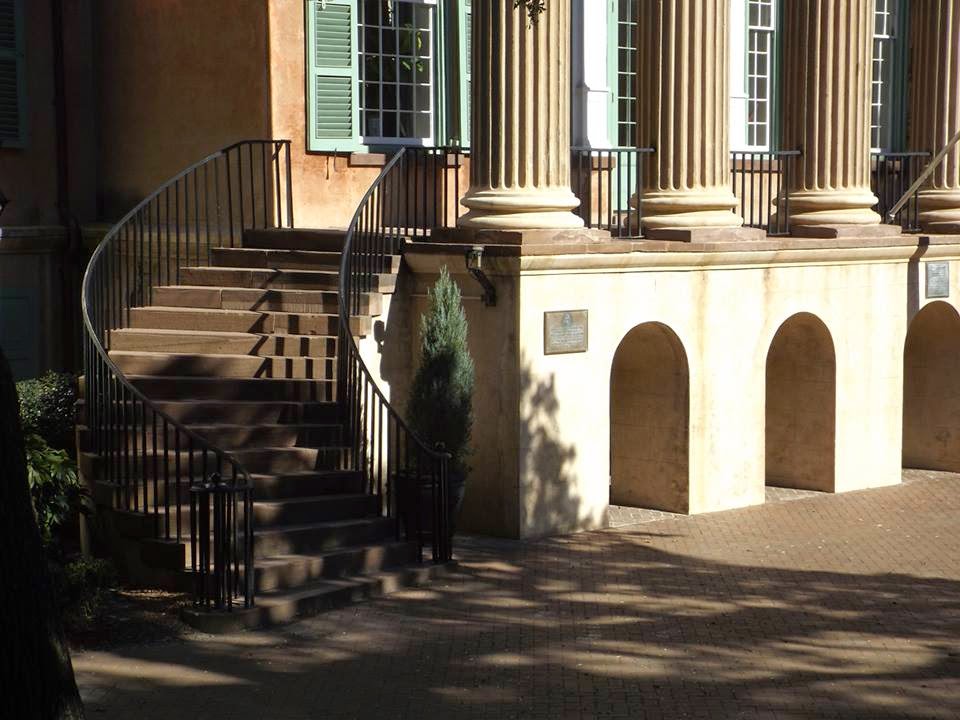